Yet Another Update On Jurassic Park 4 & Indiana Jones 5 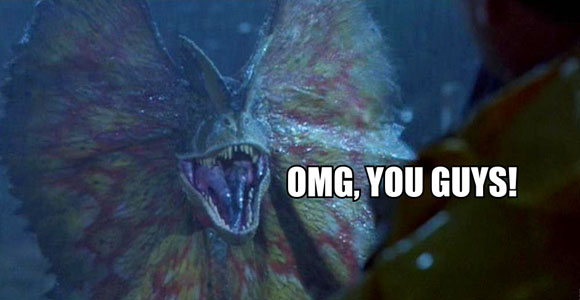 Oh look, some more information on Jurassic Park 4 and Indiana Jones 5. LucasFilm new co-chairman Kathleen Kennedy is the most recent one involved who had something new to say. And I kid you not, one of her responses was a shrug.

The last information we had on the Indy 5 front was from Raiders of the Lost Ark actress Karen Allen. She had it straight from Steven Spielberg that the film was still on. “They want to do a fifth, from what I understand, but they don’t want to do it just to do it,” she said. “they want to do it if they can come up with a story that everybody is happy with and that everybody likes.”

Before that, producer Frank Marshall said, “As far as I know [George Lucas is] not writing a fifth Indy.” But MTV asked Kennedy directly at a press event for the blu-ray release of E.T.

When I asked her about all the question marks surrounding a fifth installment of that franchise, Kennedy dodged the question with a shrug of her shoulders, offering up neither a glimmer of hope or kabash on the idea.

Ouch. But there was better news on JP4 from ComingSoon.net:

“Writing, writing, writing,” she says of the current stage in developing the next sequel to Spielberg’s 1993 dinosaur epic. “It’s really hard to keep these things going when there’s an expectation and a desire by the public and the audience to keep certain franchises going. As filmmakers, we often sit there going, ‘Okay. We have to answer the question, ‘Why do another one?” If you can’t answer that question, you shouldn’t be doing it. It’s tough. We’re trying to come up with a story that makes sense and isn’t going to disappoint people and is, hopefully, going to get people excited and reinvigorate the franchise. We’ve got to start with a script and the story.”

She also mentioned the studio is very anxious to see JP4. Rise of the Planet of the Apes screenwriters Rick Jaffa and Amanda Silver taking have been tasked with writing the script which Marshall confirmed would not have weaponized dinosaurs. It’s tentatively scheduled for release in 2014.