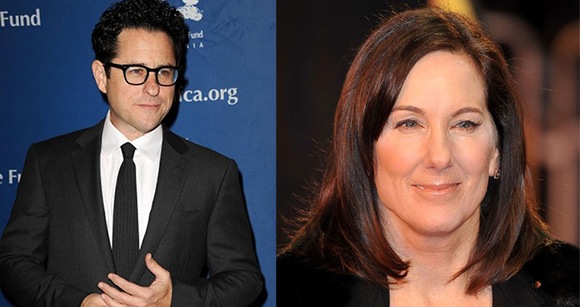 The Hollywood Reporter has an in-depth of profile of LucasFilm President Kathleen Kennedy, and while the whole thing is worth a read—Kennedy “know[s] the difference between a Colt .45 and a Colt .45 Gold Cup” and started dating her future husband, Raiders of the Lost Ark producer Frank Marshall, behind the back of Kennedy’s long-time collaborator Steven Spielberg (“I wanted Kathy to be working with me as my assistant and Frank to be producing the movie, and never the twain shall meet,” recalled Spielberg, “But you can’t stop love.”)—what caught my attention as an inveterate Star Wars nerd was something different.

Namely, the story of the secret meetings where Kennedy got J.J. Abrams to direct Star Wars: Episode VII.

We already knew that Abrams initially turned down Star Wars because “just being a fan, I wouldn’t even want to be involved in the next version of those things… I’d rather be in the audience.” So how’d Kennedy change his mind?

Famously plain-spoken, she summarizes her pitch like this: “Please do Star Wars.”

There was more to it than just that, though. Kennedy also used Michael Arndt and The Empire Strikes Back writer Lawrence Kasdan being on board to write and consult, respectively: According to Kennedy, the director “was flipping out when he found out that Michael and Larry were on the movie already.”

Now that she had him hooked, it was time to reel him in. Recalls Abrams:

“I learned firsthand how incredible and persuasive she is.” Some — but not all — of his reservations were dispelled. “The thing about any pre-existing franchise — I’d sort of done that,” he says. “But when I met with Kathy, it was suddenly very tantalizing.”

Kennedy, Abrams and the writers met secretly for about three hours Dec. 19, and “J.J. was just on the ceiling when I walked out the door,” she recalls. But still, she says, Abrams had “very genuine concerns” about his obligations elsewhere and the impact on his wife and three kids, given the likelihood that the film would not be shot in Los Angeles. And then there was the unique nature of the franchise. “If there was any pause on J.J.’s part, it was the same pause everybody has — including myself — stepping into this,” she says. “Which is, it’s daunting.”

“We spent a lot of time talking about how meaningful Star Wars is and the depth of the mythology that George has created and how we carry that into the next chapter,” she says.” Finally, after a day of furious negotiation, the deal closed the afternoon of Jan. 25. To the bitter end, Abrams was telling associates that he still wasn’t fully committed to directing the project. But Kennedy is confident that he will be in the chair when the cameras roll.

So there you  have it. Kathleen Kennedy: Professional badass film producer/studio exec.

There are several other Episode VII-related tidbits to be found in the profile: Namely, that Kennedy shares Abrams’ willingness to push back the release date from 2015 (“Our goal is to move as quickly as we can, and we’ll see what happens. The timetable we care about is getting the story.”); that George Lucas called Spielberg and “actually asked for [Kennedy’s] hand in business” (Spielberg’s words) before she was named president of LucasFilm; and that both Kennedy and Spielberg believe in Lucas’ ability to step back into the role of a consultant. Or, as Spielberg puts it, “He’s ready to start living without the burden and weight and responsibility of this huge corporate asset.” Good for him. Keep your fingers out of it, George.