Kate’s Party: Or, How 60,000 Trolls Facebook-Crashed a Random Party in Australia 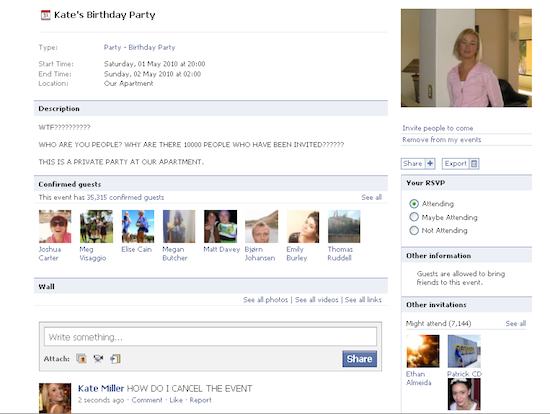 One Redditor even made a graph of the number of attendees over time: 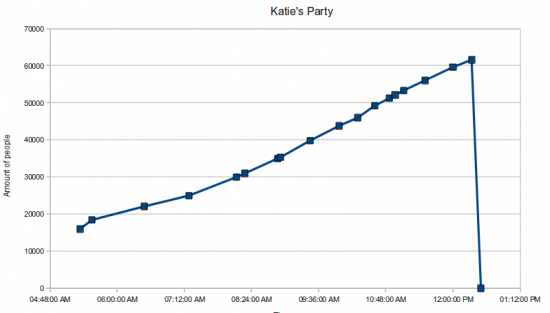 Why were there 10,000 people who’d signed up? It all began with professional writer/troll David Thorne of 27b/6, who on April 21st Tweeted out to his 27,000 followers: “Yay. Kate’s having a party in her small apartment. Hit attending & give the host an aneurysm.”

Much like the crazed killer who hounded Steve Martin in The Jerk, Thorne, who is Australian, picked Kate’s party seemingly at random.

Nevertheless, the Internet flashmob took off in a big way on social aggregator sites like Reddit and on the ‘chans, and in the process of random strangers, the majority of whom couldn’t possibly attend without a very expensive flight, signing up for the party, it entered the exalted realm of Internet happening, with entries on Know Your Meme, noted 4chan treehouse Encyclopedia Dramatica (NSFW), and even Wikipedia, until mods wiped out the page.

What, if anything, is the takeaway here, the Big Moral Lesson? For one: It does all seem a little mean. Kate wasn’t a public figure — though now she is, in a sense. Having a Facebook party gummed up is one thing, but it’s another, potentially hurtful thing for dozens of websites about you — much less fake porn — to pop up all over the Internet when you’re just a private citizen who made the mistake of not setting an event to ‘private,’ a common enough mistake. Geekosystem has attempted to get in touch with Kate a few times since yesterday, but we haven’t yet gotten a response.

Some of the event comments, via Encyclopedia Dramatica: 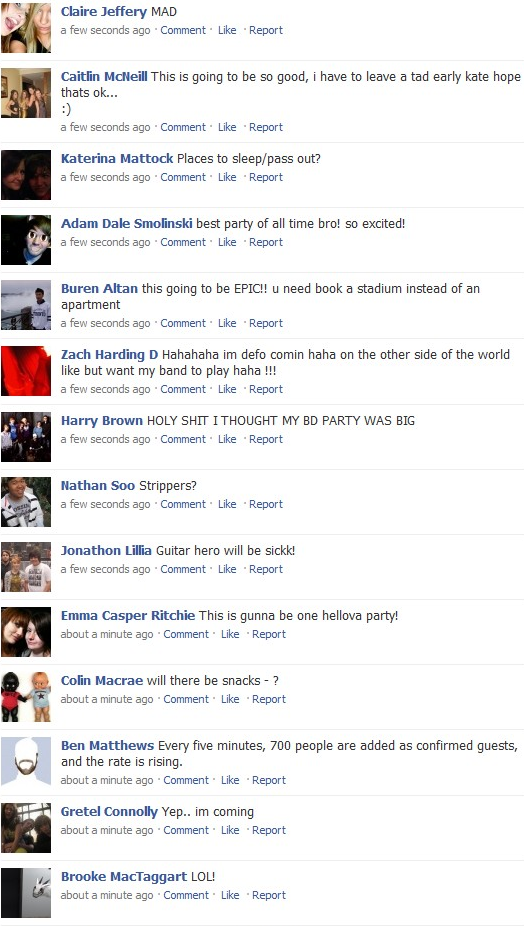 There are two main lessons about the Web here. The hard one: On the Internet, there’s a very slim chance that you — whoever you are — will inexplicably become the target of a large number of people’s attention. You’re just a viral uploaded video (you don’t have to have uploaded it), a Facebook pic, or a 4chan bomb away from the attention of thousands of strangers — and that’s a scary thing.

The easy one: Take the time to learn about your Facebook settings, and don’t leave them on the extremely privacy-unfriendly default. Many angry words have been written by many smart people about Facebook’s privacy problems — some of them bugs, some seemingly more sinister — and their infuriating habit of erasing your existent privacy settings when they roll out new upgrades. Fight the power.