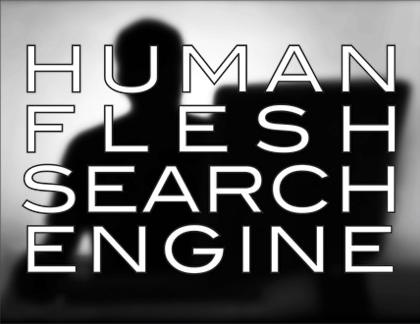 This week’s New York Times Magazine has a fascinating article about the Chinese phenomenon of renrou sousuo yinqing: crowdsourced “Human Flesh Search Engines” that seek out individuals who have committed some offending act, use information available online to identify them, and then try to publicly shame them.

The article’s hook is the story of a woman who stomped a cat to death with a high-heeled shoe and anonymously uploaded a video to the Internet. When it spread to the forums on Mop.com, the Human Flesh Search Engine kicked into gear as people were outraged by the video, and within days, a combination of detective work, crowdsourcing, and media attention allowed them to track down and identify the woman and exact their wrath on her:

…Locals reported that nothing in their city resembled the backdrop in the video. But Netizens kept sifting through the clues, confident they could track down one person in a nation of more than a billion. They were right.

The traditional media picked up the story, and people all across China saw the kitten killer’s photo on television and in newspapers. “I know this woman,” wrote I’m Not Desert Angel four days after the search began. “She’s not in Hangzhou. She lives in the small town I live in here in northeastern China. God, she’s a nurse! That’s all I can say.”

Only six days after the first Mop post about the video, the kitten killer’s home was revealed as the town of Luobei in Heilongjiang Province, in the far northeast, and her name — Wang Jiao — was made public, as were her phone number and her employer. Wang Jiao and the cameraman who filmed her were dismissed from what the Chinese call iron rice bowls, government jobs that usually last to retirement and pay a pension until death.

As Fimoculous points out, there have been American analogues to the renrou sousuo yingqing in some of the mass actions taken by 4chan: They too tracked down a cat abuser based on a video posted on the Internet. But the Human Flesh Search Engine is all the more important for filling in gaps in the Chinese legal system: whereas 4chan collaborated with police in their cat abuse case, China doesn’t have clear animal abuse laws, and so mass shaming had to come before legal action. Lest you decide that that sort of vigilantism is an entirely good thing, the Human Flesh Search Engine has also turned its ire on Chinese citizens who they don’t think are patriotic enough and journalists who call for moderation on Tibet.

Little Red Book has an information-rich, if rather critical, profile on Mop.com.

(NYT via Waxy via Fimoculous. image via Shanghaiist)