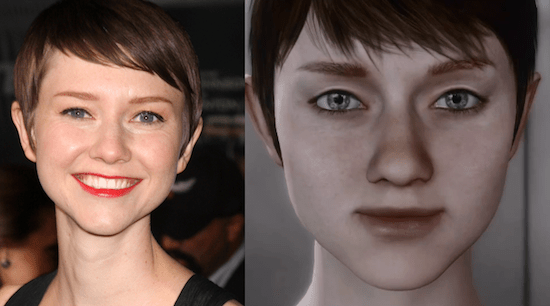 On the left is actor Valorie Curry (Veronica Mars) and on the right is Valorie Curry as rendered by Quantic Dream and their new motion capture capability. The screenshot right was taken from a short film called Kara, which is rendered in real-time on a PS3 sing Quantic’s new motion capture engine. Unlike previous techniques, the system uses 64 cameras to record the entire actor in one go, capturing body and facial expressions all at once. For it’s part, Kara is a remarkable piece of work, and features the most scantily clad robot in recent history. Clearly Quantic knew how to grab headlines: Amazing technology, semi-naked robots.

Quantic has said that the engine will be used in a forthcoming PS3 game, but has remained mum on what the plot of said game will be. While Kara is a compelling piece of work, it sadly hasn’t been confirmed as anything more than a tech demo. However, a free-thinking robot on the run has a nice Blade Runner feel to it, and would certainly make for a good story telling opportunity.

The video, in it’s motion-captured goodness, follows below. There are some cusses, discussion of sex, and a barely covered nude robot girl, so let’s call that NSFW-ish.