It’s Official: Justice League & Avengers 2 Fight It Out In Theaters In 2015 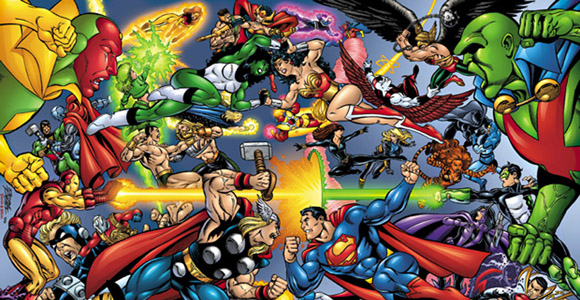 It’s either the dumbest or the bravest decision in Hollywood (*cough*dumbest*cough*) – Warner Bros. has announced the release date for their Justice League film. 2015. The same year The Avengers sequel is released. I have a feeling there’s a lot of arm flailing going on in the Warners offices. And not that awesome Kermit kind.

I just…what? I think Warner Bros. needs an intervention. Or at least a good event planner.

It’s one thing to pit superhero film against superhero film, we saw that this past summer with The Avengers and The Dark Knight Rises, but those are two very different beasts. Putting a completely unknown (and by unknown I mean, they really still don’t know what they’re doing with it) superhero team film up against the sequel to a record-breaking team film that galvanized audiences is a terrible idea.

I suppose the argument could be made that simply saying their film  will be released the same year as The Avengers 2 will get people talking about it more and that’s free press but I really don’t think something with the name “Justice League” on it really needs that.

Of course it is interesting timing Warner Bros. decided to make this announcement a day after their big win in the Superman legal battle. It may be a little “shouting from the rooftops” moment but we’re not even sure what’s going to happen with Superman as he relates to the Justice League. It would be really weird not to have him included in the film but if Henry Cavill and Man of Steel don’t work out, are they willing to find another worthy contender to take up the mantle on such short notice? Or will they say screw Cavill, screw audiences being confused by two Supermans, we’re just going to cast someone else for Justice League. The possibilities are annoyingly all over the map.

But what does this mean for all the other DC Comics properties already in some stage of production? What’s Warners plan? Do they even have one or are they simply throwing darts and hoping another one lands on bullseye (no, not that Bullseye)?

All we know about the Justice League project at the moment is Will Beall is writing the script. Let’s just cross our fingers they don’t place the release dates within in the same month. Right now I’m hoping someone over there can be the voice of reason and come up with something solid before DC’s film properties get a reputation. Oh wait…