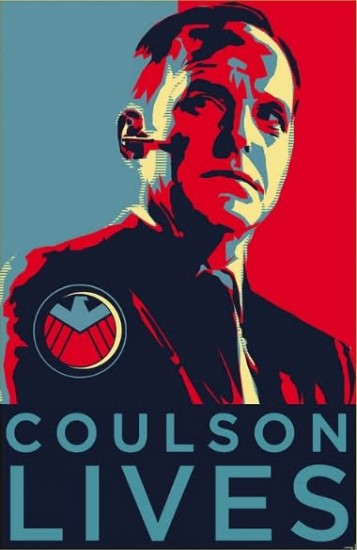 You can put your plans to avenge Coulson on hold–’cause he ain’t dead. Clark Gregg showed up at the Marvel Television panel at New York Comic Con last night to help announce that everyone’s favorite agent would be kicking butt and deadpan snarking in the upcoming TV show S.H.I.E.L.D., the pilot of which is being directed by Joss Whedon.

Said Gregg, after a video tribute to Agent “His Name is Phil” Coulson got the crowd all nice and riled up:

“I just want to say, because I won’t have another chance to ask this — ‘Have you heard of a Life Model Decoy?’ I don’t know if you’ve read the theories from the people on Twitter, but there’s this guy called the Vision. I don’t know if you saw the UK version of the DVD, but the blade wasn’t coming out of his chest. There’s a tesseract!

Then Joss Whedon himself put in an appearance, albeit via video, to address the issue of Coulson’s death (COULSOOON! NOOOOO!) and (wait for it…) subsequent return:

“We all love Clark Gregg, there’s no doubt about that. From before we made The Avengers, we discussed whether there was a way for him to be a part of the Marvel Universe, perhaps a part of a TV show even after his death… He’s headlining the S.H.I.E.L.D. show and always was.”

Amazing news for Coulson fans (that’s everyone, right?)! I just hope that S.H.I.E.L.D. doesn’t end up taking place before The Avengers, meaning Coulson could be in it and still die at the hands of Loki later on. Marvel Studios President Kevin Feige showing up in the aforementionedvideo wearing a “Coulson Lives” t-shirt, not to mention the Twitter reaction of Gregg himself (“–thanks to the #CoulsonLives crew. You brought him back to life!!!”), would seem to indicate that Coulson is back for good… and I choose to believe that he is. Whedon wouldn’t be that sadistic in his trolling, right? Right?!

Nope, Coulson’s definitely not dead. I’m putting my trust in you, Clark.