Buffy’s Xander Is Responsible For That Avengers Shawarma Scene. Also, Joss Whedon Is Obsessed With Shawarma. 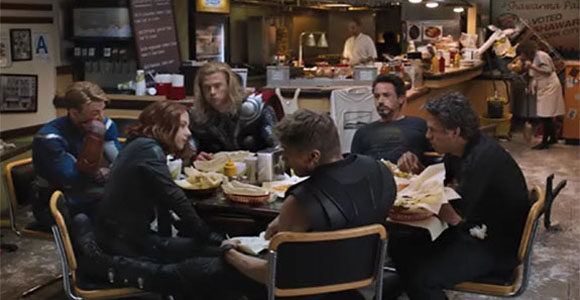 Shawarma sales went through the roof after everyone in the world saw The Avengers but an interesting fact has just come to light thanks to one Buffy the Vampire Slayer fan. Shawarma has been on Joss Whedon’s mind for a while. In fact, it got Xander, Nicholas Brendon, his role. Read on for details!

It was Youtuber Buffyfan45, J.P. Gagen, who uploaded a bit from the DVD extras from Buffy The Vampire Slayer‘s Chosen Collection. Brandon recounts his first audition for Xander, which didn’t go particularly well.

“I will tell you the word that probably changed your life,” said Whedon. “Shawarma.”

“We brought him in, we weren’t sure, we had other people, it wasn’t a slam dunk, it almost ever is. Nicky just tore the place apart,” said Whedon. “And afterwards he was like, ‘Does anybody feel like shawarma? I feel like some shawarma.'”

And that, as you well know, is Robert Downey Jr.’s exactly line as Iron Man from The Avengers. Take a look at the video for yourself, with added commentary from Brendon on the whole experience.