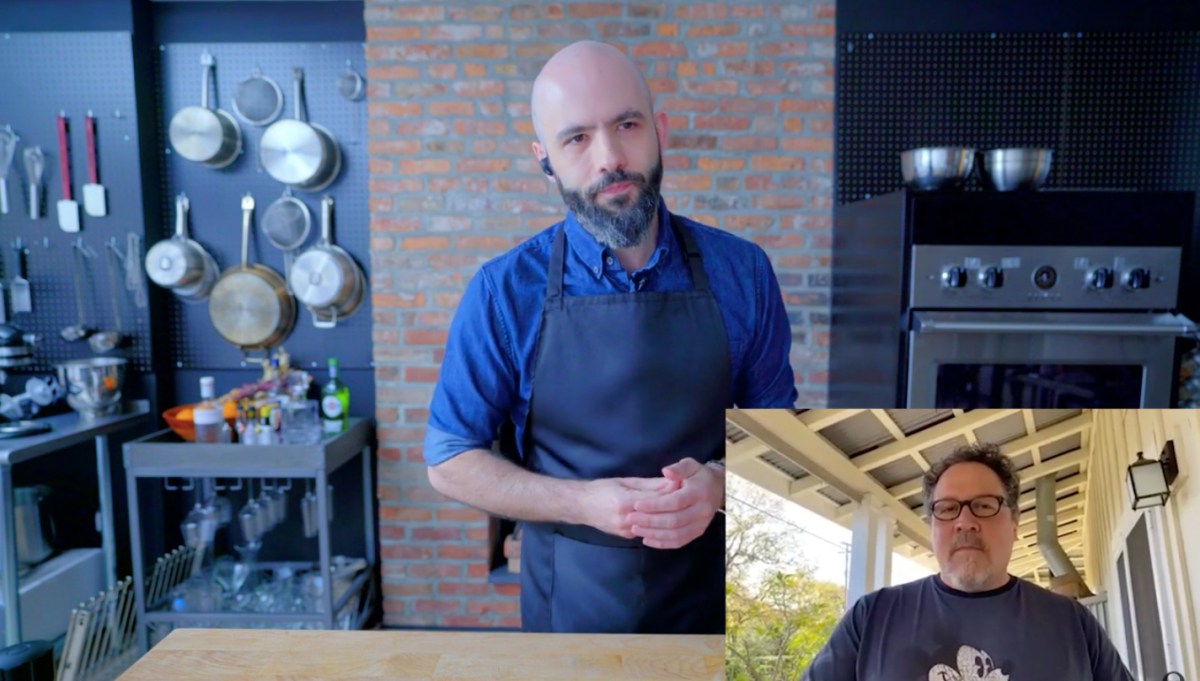 As someone who, like Pepper Potts, is allergic to berries, it broke my heart to know that Grogu’s macarons are yet another seemingly delicious treat I will never have. Recently, the creator of Disney+’s  The Mandalorian and love of my life Jon Favreau took to YouTube pop culture cooking show Binging With Babish to talk about the wonderfully blue treats that Grogu threw up all over himself on the show.

The YouTube channel, which also has videos from Sohla El-Waylly (who fans may know from Bon Appétit), is filled with wonderful recipes and videos from Andrew Rea (Babish’s real name who got his stage name from The West Wing‘s Oliver Babish which I love because Oliver Platt brought that character to life AND was in Favreau’s movie Chef) and his talented network of chefs and bakers. This particular video will make fans of The Mandalorian extremely happy. (Yes, I’m going to make these minus the raspberry extract.)

“Now that this is already one of the best days of my life, let’s make it even better,” Babish says, and honestly, I have never felt seen in this way before. I’m talking exclusively about the excitement of talking to Jon Favreau. I would die if I ever spoke to Favreau, and no, that is not hyperbole.

The video shows fans of the show how to make Grogu’s tasty treat that he stole from that boy in his class on Nevarro because, as Jon Favreau points out, kids want to do everything that Baby Yoda does, and that includes eating like him—which didn’t come to mind when they made him eat these space macarons because, let’s face it, macarons are EXPENSIVE. (And also not that easy to make.)

So the video does a great job of showing two options for the treats, and it’s just a fun way to explore the world of The Mandalorian with your family. If you’re like me, you probably get really into food videos and suddenly think “Oh, I can do that,” and while I do have the advantage of growing up Italian and cooking all the time on my side, I still probably would make terrible macarons.

What I love about this interaction, though, is that Babish is clearly so excited to talk to Favreau but Favreau is equally as excited. When looking at his work, Favreau always brings a truth to the story that he’s telling that seems completely authentic to whatever world he’s building. Case in point: The movie Chef that is a hit with chefs and the film world alike. (Chef is a perfect movie in my mind, and nothing will change that fact.)

He went on to do things like The Chef Show and constantly takes food aspects of his work seriously, so to watch Favreau and Babish geek out a bit? A delight for me, personally. I love Jon Favreau and his fun Mickey Mouse shirt, and I love that I can now make the space macarons thanks to Babish! (Also, if you want to drop a recipe for those fish eggs, I’d probably also try to make those.)

(image: screengrab from Binging with Babish)