Angelina Jolie’s Daughter Is Ready For Her Close-Up, Lands Role In Maleficent 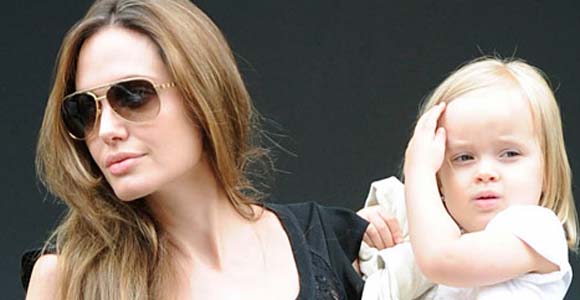 Vivienne Jolie-Pitt. Learn her name. Love it. She’s a future Oscar winner. Or so hopes her parents, Angelina Jolie and Brad Pitt. The 4-year-old has herself a role in momma’s upcoming Sleeping Beauty film, Maleficent. Read on for who she’ll be playing and to find out which comic book professional wrote the script.

We got our first look at Jolie as the villainous Maleficent just two months ago but since then, news has been rather mum. Sure, we got a picture of her flying and a few other shots from the set but we’ve been in wait-and-see mode on the film. But now we’ve learned one of Jolie’s offspring has joined the cast as Princess Aurora.

“But wait,” you ask, “isn’t Elle Fanning playing that role?”

“The film will mark Jolie’s first acting gig in two years and it was her children, in fact, that pushed her to pursue the project,” writes The Hollywood Reporter. “In December she told THR her children want her to make the movie and even call her ‘mom-elicent.'” Jolie has six children, Maddox Chivan, Zahara Marley, Shiloh Nouvel, Pax Thien, and Knox Léon, the twin brother of Vivienne.

“The live-action film explores the origins of Disney’s most iconic villain, Maleficent, and what led her to curse Princess Aurora in Disney’s animated classic Sleeping Beauty,” a statement from the studio says. Paul Dini and Linda Woolverton wrote the screenplay for the project.

Yeah. That Paul Dini. The one who brought us Batman: The Animated Series plus tons of other successful series, writer of awesome comic books and video games (Batman: Arkham Asylum & City), and guy that makes us say, “we’re not worthy.” Woolverton wrote the screenplay for Disney’s Beauty and the Beast and co-wrote the screenplay for the The Lion King, so now I’m even more excited for this film and assured it will be awesome.

(via Empire Online, The Hollywood Reporter)