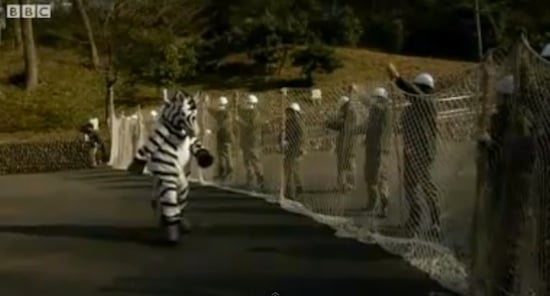 Pop quiz, hotshot. You’re running a zoo and an earthquake strikes. Cages break open, and panicked animals are roaming the streets. What’s your first move? If you said “Secure the zebra at all costs,” you’re…well, we don’t know if you’re right, but you’re at least of a mind with staff at this Japanese zoo. In a recent emergency drill, zoo staff practiced their zebra-wrangling skills, in case the unthinkable should happen. They didn’t want to risk loosing an actual zebra on the unsuspecting public, though — that’s exactly the worst-case scenario they’re trying to avoid! — so instead used a man in a zebra suit to stand in for a zebra running wild and terrified through the streets. The result, of course, is pure comic gold.

Now, we don’t know how well this training exercise prepares Japanese zookeepers for an actual zebra escape. What we do know, though, is that if a group of furries ever starts rampaging through the zoo, that staff is going to be among the most prepared in the history of the world.