When Flying To The Olympics, Women Are Second Class To Men | The Mary Sue

When Flying To The Olympics, Women Are Second Class To Men 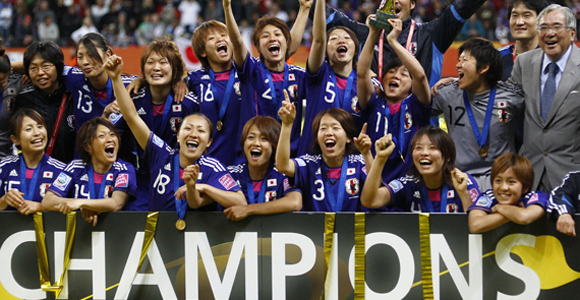 Japan’s women’s soccer team scored a huge win for their country last year when they beat the United States for the World Cup. But apparently that amounts to nothing. They flew to Europe earlier this week along with the men’s team in anticipation of the London Olympics. The men had seats in business class. The women sat in coach. And they aren’t the only team seated this way. What gives?

You can try to come up with an excuse as to why this happened that doesn’t involve sexism but you’ll probably come up empty. IHT Rendezvous of the NY Times reported that according to Japanese Football Association, the men and women’s teams left on the same flight. “I guess it should have been the other way around,” said Japanese lead player Homare Sawa, “Even just in terms of age, we are senior.”

And in terms of talent, the women are on top. They’re ranked #3 in the world while their counterparts sit at #20.

IHT Rendezvous writes, “Similar treatment was given to the Australian women’s basketball team, The Sydney Morning Herald reported on Thursday. The men’s team, known as the Boomers, was seated in business class, while the women, the Opals, were in premium economy seats.” The women’s team has taken home silver medals in the last three Olympics while the men have never medaled.

In the case of the Australians, a spokesperson told the reporter each team decided how to spend their own budget but that excuse has not been given for the Japanese. “The Japan Football Association has been funding male footballers to fly business class since 1996. The women’s plane tickets had also been upgraded, but only to premium economy,” wrote BBC News. “The association has said that seat upgrade for the male players was in recognition of their professional status, local media report.”

Good to see players are being awarded for all their hard work. How about a little equality next time?