Well, now we know where Levine got the idea for Andrew Ryan. 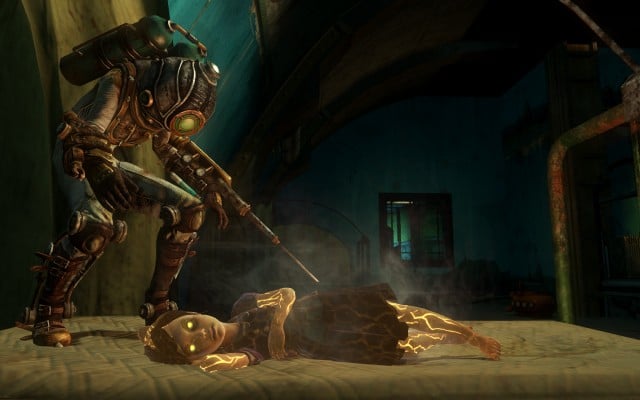 Sad news for Bioshock fans today: according to a statement on the Irrational Games website, Ken Levine will be shutting down the studio and laying off all but 15 people for a new, “more entrepreneurial endeavor ” with Take-Two instead. So, you know, guess it’s also sad for Irrational Games employees who liked having some semblance of job security.

Levine explains his decision in the statement, quoted in part below:

Seventeen years is a long time to do any job, even the best one. And working with the incredible team at Irrational Games is indeed the best job I’ve ever had. While I’m deeply proud of what we’ve accomplished together, my passion has turned to making a different kind of game than we’ve done before. To meet the challenge ahead, I need to refocus my energy on a smaller team with a flatter structure and a more direct relationship with gamers.  In many ways, it will be a return to how we started: a small team making games for the core gaming audience.

He also maintains that those soon-to-be unemployed workers will have the chance to “say their goodbyes and put together their portfolios,” and will receive financial support in the coming months. Recruiting fairs will also be held to give “3rd party studios and publishers a chance to hold interviews with departing Irrational staff,” and Take-Two will probably scoop up a lot of those displaced people. Odd there that the focus in that phrasing is on the 3rd party studios and not, you know, on all the staff members he’s booting out, but okay.

There is, of course, also a slight chance that Irrational Games was in some kind of financial trouble for a while and that this is more money-motivated than anyone is letting on. After all, Bioshock Infinite was not only incredibly expensive, but also plagued by delays and scrapped features. But we suspect that if this were the case, Levine would be upfront about it and not couch it in so much “it’s time for a change!” language.

I don’t blame Ken Levine for wanting to shake things up and start fresh, and the idea of having him work on smaller, narrative-driven games sounds like fun. But did he have to fire a whole bunch of people and shut down an entire company to do it? Would it have been possible for him to hand the company over to someone else instead, so he could leave for greener pastures without burning down the bridges to the old one? Was he really that stifled by having employees he had to give money to? This is basically the game industry equivalent of moving to, like, the middle of the ocean so you don’t have to pay taxes or — oh. Oh. That whole storyline suddenly makes a lot more sense now.