There is not enough time in the day for all of the facepalms this inspires. 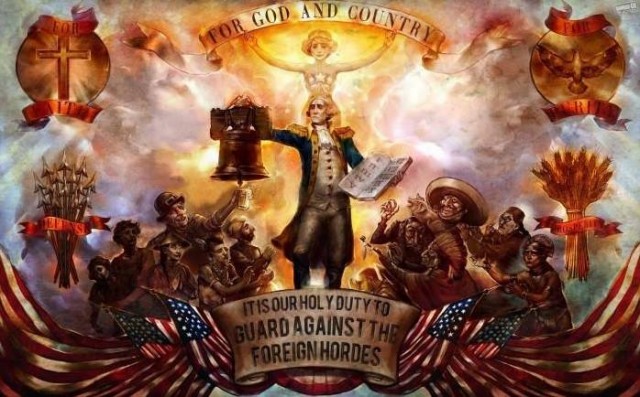 Poe’s Law is an Internet phenomenon in which reality and satire become indistinguishable from each other. In a prime example, a conservative Facebook group seemingly became unable to distinguish the outlandish political satire of the BioShock series from their own beliefs, and they posted an in-game propaganda image to their page.

The National Liberty Federation is a political action group you can find on Facebook and libertyfederation.com, and they describe themselves like this:

The National Liberty Federation (NLF) at LibertyFederation.com is dedicated to promoting awareness regarding our inalienable rights. Through educational endeavors, public forums and other mass communications, we seek to ensure our citizenry, members of the media, punditry, and government, remain focused on the importance of free enterprise, limited government, fiscal responsibility, individual liberty, and American heritage, as a means for perpetuating a free society.

They fell victim to Poe’s Law by posting BioShock Infinite’s depiction of George Washington performing his “holy duty to guard against the foreign hordes,” which probably gives you a better idea of what they’re all about than their text blurb ever could. For real, guys? You couldn’t tell this was satire? You may need to work on your “educational endeavors.”

For sarcastic Facebook BioShock fans, this has been something of a blessing, as it has provided a comments section rife with endless BioShock quotes and jokes poking fun at the misunderstanding. If you’re a fan of BioShock and some darn good real world comedy, go ahead and share your favorite ridiculous quote with them.

(via Polygon, image via The National Liberty Foundation on Facebook)