Report: Iranian Government Blocking Battle.net Due to Promotion of Superstition and Mythology 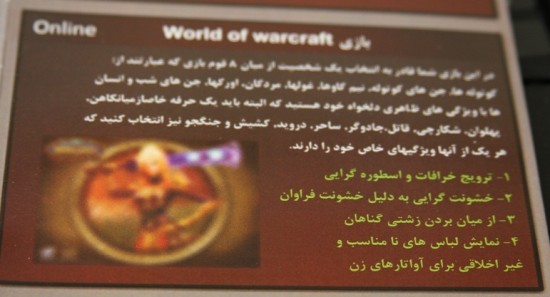 When it comes to Iran and the Internet, we never quite know what to expect, but we can usually assume that it’s never anything good regarding digital freedom. A Tehran Blizzard player posted to the forums that Blizzard’s online service is now blocked from the Iranian Internet. The user posted a screenshot of the government’s message that lists reasons for the block, which includes the “promotion of superstition and mythology.”

The reasons listed on the blockage message include:

The Tehran user assures us that the “promotion of violence due to too much violence” is literally what is written. The wording would be funny if it weren’t something that’s actually stripping away Internet freedom. For people who aren’t in the know, Battle.net is Blizzard’s service that allows one to play their games online, including World of Warcraft, StarCraft, and Diablo 3. Most Blizzard games require users to log into Battle.net even if they’re not playing online, so if Battle.net is blocked, Iranian users wouldn’t be able to play offline games, like StarCraft II‘s single player campaign. Of course, there are certain ways around that sort of thing if an Iranian user feels pushed to nefarious means. It’d be a little difficult to blame them, considering it’s not their fault they can’t log into Battle.net even with a legitimate copy of a game.

It is also being reported that Battle.net isn’t the only online service being blocked, as Guild Wars is affected by a similar block as well, and unfortunate thing considering the sequel is being released only four days from now on August 28.

It would seem that if an Iranian gamer wants to play something worthwhile online, they’d have to hope they find a game that the Iranian government doesn’t know about. The Iranian gamer who posted the screenshot of the block, who calls himself Siavash, noted that he and his friends can access Battle.net using various workarounds, such as a virtual private network or some kind of proxy. Again, though, considering the government blocked the games, using some kind of workaround to access them would be considering nefarious means, so it’s a bit risky.

Blizzard said they’re looking into the matter, though unfortunately, who knows how they can change an entire government’s mind about a video game.