Human Evolution Perfected, We Will Strap iPads to Our Faces | The Mary Sue

Human Evolution Perfected, We Will Now Strap iPads to Our Faces

The revolution will not be televised. It will be FaceTimed. 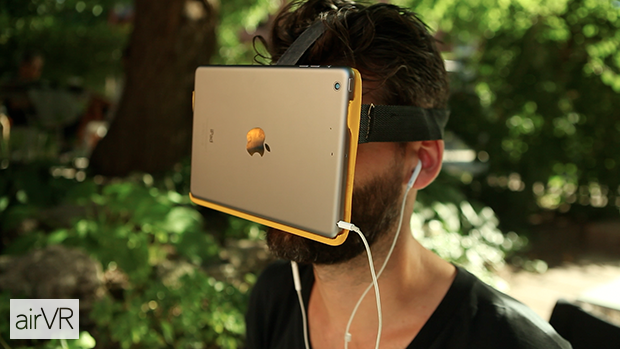 In what is somehow a real thing and surprisingly not a parody of the natural evolution of people walking around and constantly taking in the world through the screen of their tablet or smartphone, there will soon be a head-mount for iPads. The world truly is a magical place full of wonders.

It’s actually a decent idea, too. The Kickstarter for AirVR (which is close to its funding goal with a full 26 days still left to go) is a lot like other virtual reality solutions from Samsung and Google that are already in the works. Google’s solution is a DIY head-mount for smartphones to use as your VR screen that you can build out of cardboard, and Samsung’s is a specialized mount meant to work with Samsung’s smartphones as their screen.

Apple hasn’t jumped on the smartphone as VR screen technology just yet, so AirVR decided to step in and be the first to make a tablet-sized solution. Here it is in all of its “your dad/grandma/great uncle was right; You’d totally strap that iContraption to your face if you could” glory:

The mount itself will only cost $45 when it reaches the market, whereas the Oculus rift will come at a much higher price, since it includes the cost of the screen and motion sensing technology. Despite looking like a hilarious jab at people’s obsession with their Apple products, the AirVR is actually a pretty decent idea for anyone who already owns an iPad and wants to get in on Virtual Reality. Just try to keep the idea that your iPad is trying to Superman 3 you out of your mind, and it’ll be great.

(via The Daily Dot, image via AirVR)