The Best Way to Get Girls Into Science and Tech? Help Them Become “Makers,” Says Intel 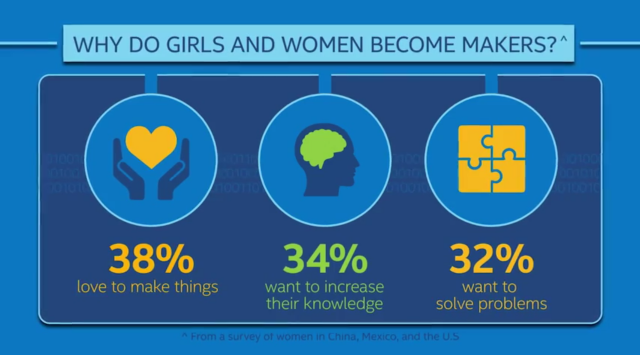 Research shows the percentage of women earning undergraduate computer science degrees in the United States is at an all-time low, despite the fact that a sizable majority of us carry mini-computers on our person at all times these days and have the audacity to call them “phones.” But a new study by Intel says there’s hope for the future.

Entitled “MakeHers: Engaging Girls and Women in Technology through Making, Creating and Inventing,” (and gosh do I love that—it sounds like a pun Leslie Knope would make), the global report looks at how the DIY tech movement of  “makers” is positively influencing a new generation of kids around the world to enjoy science and engineering. In the U.S. especially, boys and girls are equally likely to be “makers” at the same age; 1 in 4 kids in their pre-teen and teenage years have made things with technology during the past year, and 7 in 10 are interested in learning how.

This is good news for those of us who are worried about the gender breakdown of engineering and science jobs, Intel says. It’s still an uphill battle, of course—1 in 6 women say they face cultural biases as female makers, and 1 in 3 say the lack of mentorship from other women can be a challenge. But making things with electronic tools provides girls an entry point into STEM related fields they typically wouldn’t get otherwise.

So how to get girls involved in the first place? Public spaces which encourage them to make things can do wonders, says Intel. To that end there are Maker Faires all over the country and the world where parents can take their kids to see cool tech and science experiments, and even build their own projects. Kid-friendly programs like Girls Who Code, Code.org, or the Khan Academy computer programming classes can also be good resources as well as well. Heck, even the Girl Scouts are getting involved: they’re listed as consulting partners on the MakeHers global report, along with the Maker Education Initiative.

You can read the full breakdown of Intel’s findings over at their website, or check out this informative video below:

It seems that between this and reinstating those ads on Gamasutra, Intel’s definitely working hard to make sure that STEM positions are a little more accessible to women, don’t you think?

Previously in Girls in Tech