"As Tumblr will very excitedly let you know." 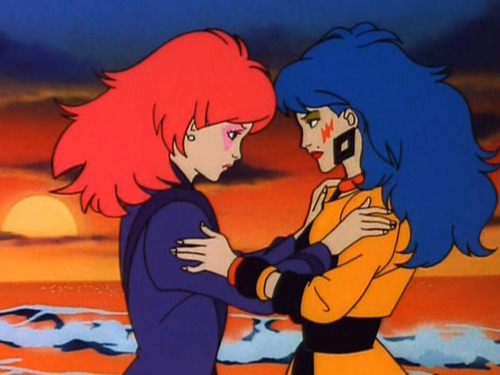 IDW’s Jem and the Holograms ongoing series is about to hit shelves in March, and judging from the creative team’s recent confirmation of a certain ship, everyone’s favorite big-haired ladies are going to be radder than ever before. Celebratory dance break time:

In an interview with AdvocateSpotlight, writer Kelly Thompson and artist Sophie Campbell were asked whether or not the series would feature LGBTQ characters:

Campbell: Definitely! Kimber and Stormer are gay and we’re discussing a few others. Beyond those I’m really hoping to see some more queer characters. It just really needs to happen. I’d love to have some gay Holograms or Misfits fans in the story. That would be awesome. Maybe they could be on the Holograms’ street team.

Thompson: We are definitely having LGBTA+ characters. Jem was always really diverse, but it was of course a bit limited by the time period and by being a children’s cartoon. It’s only natural that a modern Jem includes additional diversity. Kimber and Stormer are indeed both out gay characters in the comic and as Tumblr will very excitedly let you know, we’re going to be exploring a romantic relationship between the two characters. We have some other plans for LGBTA+ characters as well but it’s still early days and we’re still figuring out how some things can fit together to tell the best possible story.

Man, wouldn’t it be cool if all future iterations of Jem just accepted Kimber/Stormer as canon? (I’m thinking specifically of that live-action adaptation with Molly Ringwald. IMDB doesn’t even list Stormer as a character yet, but theirs is a love that cannot be denied!)

Thompson also promised that despite not appearing in the comic’s promo art (a racebent Jetta is now The Holograms’ drummer), Raya will still play an important role in the series:

I wanted to see some diversity, and definitely some drums, from The Misfits right out of the gate. Adding Jetta to the original lineup solved both those problems rather elegantly. As [Sophie] said, though we want to revisit some of the classic stories with a modern update, we don’t want to just repeat stories exactly, so having Jetta there from the inception and adding Raya to Jem and The Holograms at a later date did a great job of immediately changing that landscape for us. In my opinion, Jetta’s original story is not so key that you have to show it, but there are very important things about Raya being brought into The Holograms — namely her knowing Jem’s secret, Raya being the first person outside the immediate family to know it — that have to be addressed in story. So her story is coming, we just need a bit more time to make room for it to be told right.

You can check out some of the series’ outrageous promo art here, or head over to AdvocateSpotlight for more.