Sequels to Independence Day Now Have Names, Are Depressing 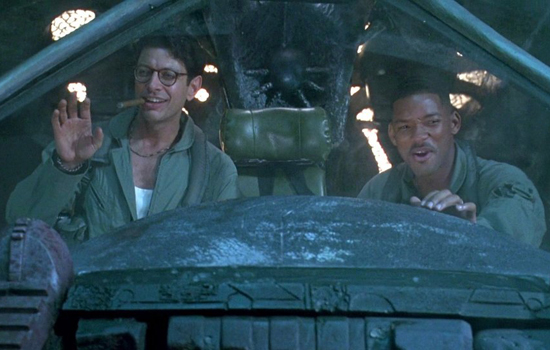 Remember Independence Day, the plucky action flick that paired the lovable Will Smith with the amusingly cynical Jeff Goldblum back in 1996? Well, there are two sequels in development for the franchise. Not one, but two. If this still leaves you with a glimmer of hope that they’ll defy the odds and somehow turn out amazing, the titles that have been attached to the duo should stamp that thought out quickly. Hint: They’re not good.

According to a translated interview on Film Starts with Roland Emmerich, writer and producer for the sequels, the names will supposedly be ID Forever Part One and ID Forever Part Two. If these two sound kind of ridiculous, never fear, they totally are. Bleeding Cool does include some speculation that might shine some hope on the matter though:

This is if they actually happen. Emmerich says that he and co-writer-producer Dean Devlin have the “right idea” and it’s “quite unique” and they’re working on it, but there is “a tough battle” between the studios and the actors. Which is to say, they have to sign everybody up to make sure the films are worth doing.

So, maybe this will all amount to nothing. Hopefully.