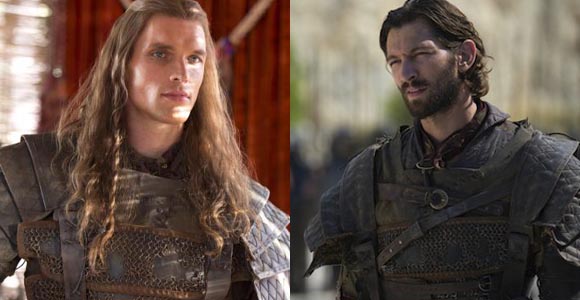 Some of us were super bummed when we found out Ed Skrein, the actor who played Daario Naharis in Season 3 of HBO’s Game of Thrones, was going to be recast for Season 4. Even more so when we realized they were giving Daario 2.0, Michiel Huisman, the same costume as Skrein, but not that same overall look. From what I’ve seen so far, reactions to Huisman have been mixed and while the actor has talked about the possible confusion for viewers before, he’s now discussing his role in the most recent episode, “Breaker of Chains.” Read on for what he had to say as well as something Jon Snow, aka Kit Harington, might actually know about the future of the series.

Huisman previously had this to say about the change-up: “I think it’s just very cleverly written and very clear from the very first episode that I’m Daario. I think that’s not a concern.” Though if traffic on our “Now We Know Why Daario Naharis Left Game Of Thrones” post the days following the premiere episode was any indication, viewers were very curious about the swap.

The Daily Beast broached the topic with Huisman again, who said he’d never spoken with Skrein:

Initially when I was asked to audition for the show, it wasn’t clear what character it was for. I thought, “This really resembles this other character that’s already there.” It wasn’t until later in the process that I realized that it was actually Daario. But they really allowed me to reinvent it. They told me to keep in mind what the character had gone through, and the backstory, but then just take it from there and give it my own interpretation, which is great, because it would be hard to replicate what someone else had done. The writers and producers were hoping that, although we’d already seen Daario a couple of times, the audience would forgive the change and accept me as Daario from now on.

And a bit more on his personal view of Daario:

I see Daario as a tiger-like fighter; someone who’s not really in for the long fight, but a quick one. He’s showy, but his showy side comes from not having anything to lose. Up until meeting Dany, he didn’t have anything to live for, so he feels he might as well have a little fun. That’s also why he pees after killing the warrior from Meereen. It’s very showy, but it also comes from, “Whatever, let’s go have some fun.” Daario is a fun character in the Daenerys storyline because he pushes her a bit.

Meanwhile, Rolling Stone is going to have a Game of Thrones feature coming up and they posted a bit of their talk with Harington on their website. FYI, they’re calling the feature, “The Winter Soldier.” But here’s what caught our eye:

Harington also revealed that once the show has its final colorful wedding  – which could still be five or more years away – he hopes to enjoy different sorts of roles. “I told my agent, ‘No more swords, no more horses,'” he said. “You [don’t want to] get stuck in things. And maybe I can cut my fucking hair.”

We can’t be sure if the writer is just having some artist fun with words or if Harington actually mentioned something about another wedding near the end of the series as a whole. If it’s the former, I’m annoyed, if it’s the later, I’m intrigued.