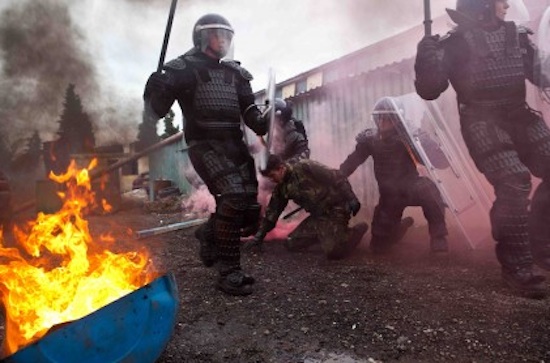 Let’s face it folks: the way the world is going these days, it seems like we’re only ever a couple of days away from descending into a frenzy of pillaging, class warfare and the sort of poor manners that generally result in flipped over cars. We hope so, at least — otherwise all this canned food we’ve been stockpiling is just going to mean us subsisting on a diet of off-brand pork and beans for longer than we care to think about. For those of you who just can’t wait to be at the heart of an angry mob, though, there is hope. For just over $125, you can be part of a workshop in England that will teach you the finer points of being a top-notch rioter — as well as help you know your enemy by playing the part of a riot cop.

Put on by Wish.co.uk, the same folks who have brought you such training seminars as Zombie Bootcamp, the Riot Training Experience will teach aspiring hooligans and looters proper car-flipping techniques, correct form for tossing bottles at police officers, and advanced techniques for getting through a line of riot shields. Participants in the training session, which is held at a specially equipped industrial park, will also find themselves on the front lines of law and order as they play the part of riot cops and get brought up to speed on the latest riot control tactics. Because really, how else are you going to know how to short circuit the latest riot control tactics when worldwide civil society collapses around us in…I dunno, let’s call it 2014 or so?

The classes are causing come controversy in England, which was rocked by riots in several cities last year, which Members of Parliament decrying the courses as inappropriate. For its part, Wish.co.uk has said that they are not encouraging anyone to riot — just teaching them how to do it correctly if they find something worth rioting over in the future.

While that may come off as a bit naive — after all, you don’t take classes in ceramics if you don’t at least intend on making a clay ashtray at some point — we do kind of buy it. This is England, after all, and if something is worth doing, it’s worth doing with proper form, even if that something involves tossing molotov cocktails at officers of the law. Which, remind us again — underhand or overhand motion?