Still not a great look, though. 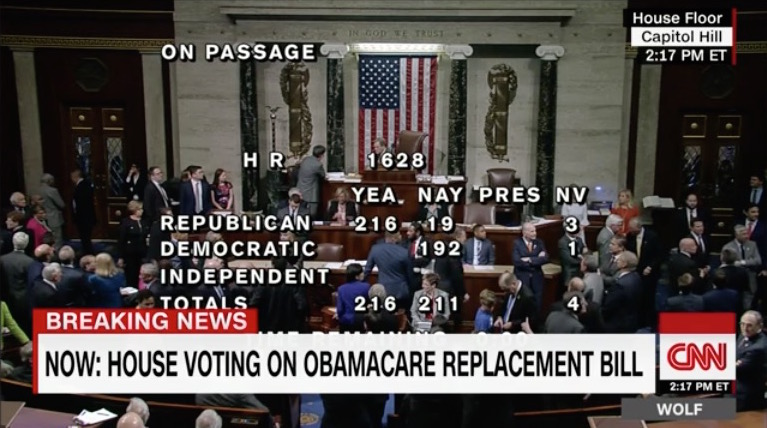 Today, Republican lawmakers let us know exactly what they think of us by passing the new Trumpcare bill. This is the bill that, among other things, guts funding for special education students’ health needs, as well as, apparently, the entire state of New York thanks to their abortion laws. It makes healthcare for transgender Americans incredibly complicated and, oh yeah, basically categorizes female gender identity as a preexisting condition.

At the devastating moment the bill was passed, something surreal happened. Song broke out on the House floor.

Yes, that’s a bunch of Democrats singing the chorus of Steam’s “Na Na Hey Hey Kiss Him Goodbye.” At first, people watching assumed it was the Republican singing, which—along with reports of cases of Bud Light being rolled into the Capitol—looked like just horrific gloating after all but 20 of them voted to strip millions of their constituents of their coverage. As in, “na na na na, hey hey hey, goodbye to your fundamental right to health care.” That’s a horrible thing to celebrate.

But it turns out it was, in fact, the Democrats doing the singing. Why? Well, it’s pretty hard to imagine Republicans are going to keep control of the House after this. Come 2018, Democrats are confident they’ll take back those seats. Hey hey hey, goodbye Republican majority. That’s the kind of bitter, scathing spite meant to be delivered though song.

And yet, this choice to break into song at this particularly devastating moment didn’t sit well with a lot of people. Many blame Nancy Pelosi and other Democrats for not fighting the bill hard enough. There was some concern that comments Pelosi has made over the last day or so—about this bill being “a scar [Republicans] will carry” and “a great civics lesson” to voters watching how their representatives voted–indicated Democrats were so confident the bill would die in the Senate, they felt comfortable using this as a sort of lesson to voters, and a way to guarantee their own success in later elections. In short, they were playing games with Americans’ lives.

Sure, they’re happy about basically being guaranteed a House majority next year. Of course, you might think that that sort of over-confidence in “guaranteed” success might be a thing Democrats would be a bit warier about this time around, but apparently not. So okay, they want to remind Republicans that just because they won this particular round, we are in no way giving up the fight.

But if that’s the case, they do have to fight. And next time hold the grins until you’re at least out of the building.