Forget #RoyalBaby, ‘a Horse Walks Into a McDonald’s’ is the Best News Out of the United Kingdom This Morning

To her credit, the horse's rider tried to use the drive through window first. 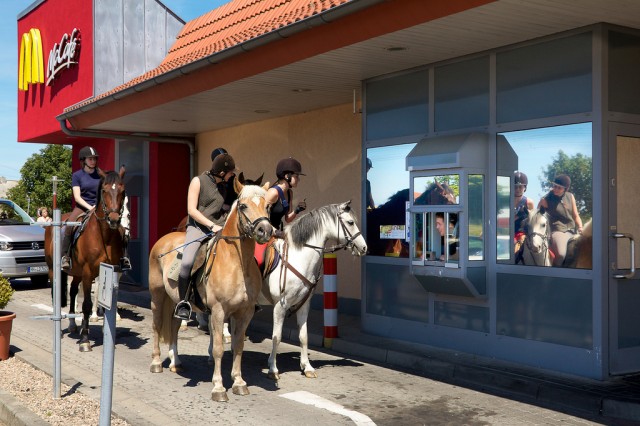 Burned out on Royal Baby but still want to keep track of the news coming out of the UK this morning? Us too. That’s why we’re bringing you the following extremely important story of a woman who was fined by police over the weekend for bringing her horse into a McDonald’s location in Greater Manchester after employees wouldn’t serve her from the drive through window. Once inside, the horse took its revenge for this act of discrimination by making the McDonald’s dining experience worse in pretty much the only way possible — taking a horse-sized dump on the floor.

According to a statement from Greater Manchester police — which was made on Facebook, because that’s all the official recognition an incident like this deserves —

The staff refused to serve the women due to company policy. The women then took the horse into the restaurant who ended up doing his business on the floor.

The sight & smell of this caused obvious distress and upset to customers trying to eat, as well as staff members.

Officers arrived at the location and woman was issued a Fixed Penalty notice for causing alarm & distress to other customers and staff.

Speaking of staff, here’s hoping the police also made the rider clean up after the animal, because otherwise some poor British burger flipper just had the worst day at work in McDonald’s in recorded history, which is really saying something. On the other hand, we’ll wager those McDonald’s employees will think twice before turning away an equestrian who wants to get a Big Mac without dismounting first.

Geekosystem horse enthusiasts — there must be some of you, right? — have you ever tried to get drive through fast food on horseback? Were you successful? Is this a thing?