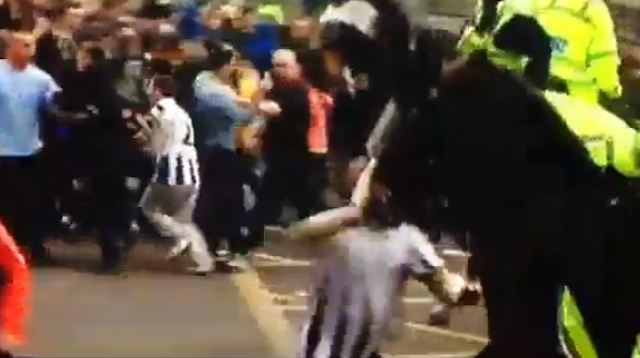 You know who apparently aren’t good losers? Fans of Newcastle soccer. Need proof? After a loss at home this weekend to rivals Sunderland, fans of the team threw themselves a good old-fashioned soccer riot. Plenty of people no doubt got punched in the face during the hullabaloo, but only one of those people was a horse. Thus, for the sake of posterity and as a warning to rioters everywhere — and those of us who are just rioters at heart — we offer this video lesson on why you shouldn’t punch a police horse.

Points for effort, guy, but you’re really fighting a losing battle here. For those of you who may be concerned, the horse is back on the job today, while the man is still most likely sleeping off however drunk you have to be to punch a horse.