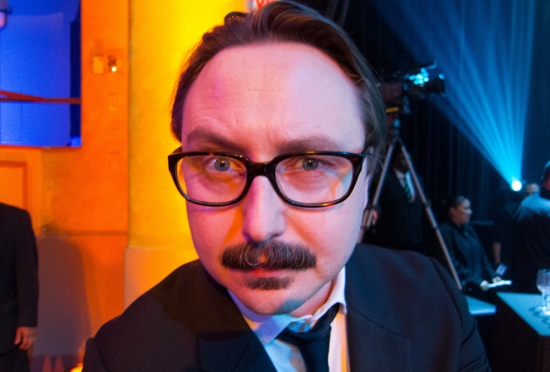 You all listen to the Judge John Hodgman podcast, right? RIGHT? Good. In case you missed last week’s episode, it featured one of the greatest moments in the show’s history. The show is hosted by occasional Daily Show correspondent, professional PC, knower of all things, and eccentric millionaire John Hodgman with co-host “Bailiff” Jesse Thorn. Hodgman sang the cover of “Baby Got Back” featured in an episode of Glee that was stolen from Jonathan Coulton, who was in the audience. Hodgman and Coulton are friends, and unlike Glee, Hodgman at least gave Coulton implied credit.

The song kicks in a little after the four minute mark, but the rest of the episode is worth listening to when you have an hour to burn, like when you’re stuck in traffic driving into the office this morning. Hodgman manages a few barbs at Glee during the performance. The case Hodgman is judging centers around a woman who insists on bringing her dog everywhere she goes under the presumption that it is a service dog, which is questionable.

Even if tough-but-fair Internet justice isn’t your thing, the episode also features a set by John Darnielle of the Mountain Goats who performs “The Best Ever Death Metal Band”, “Lovecraft in Brooklyn”, and more. Essentially it’s one of the most entertaining pieces of audio that you could spend an hour listening to.

The Judge John Hodgman podcast is released every Wednesday, and can be found in iTunes or on MaximumFun.org.