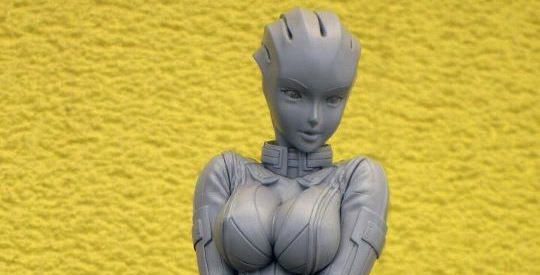 Bioware, we love to heap praise on you for joining the ranks of RPG makers who, when they include romance options in their games, allow anybody to romance anybody, period. But we need to talk. This started with you opening up a giant can of gender expression worms by allowing the internet as a whole to decide what the default FemShep would look like. Normally, we’d say that it takes three incidents to show a pattern, but in this case, we’re going to jump on at two, in the hopes that there won’t be any more.

This weekend you posted pictures of Kotobukiya’s unpainted design maquette of Mass Effect‘s Liara in a bishojou style, and asked fans what they thought of it. Liara, a doctor, archeologist, and later a ruthless trader of information perfectly willing to break the law; is depicted as a teenager. Her spine is arched to show off her butt, and her arms tightly pressed together, the better to emphasize what seems to be a significant increase in breast size compared to the in-game character model. In other words, she’s rendered in a style typical of the market for figurines inspired by anime and manga. And you asked for feedback.

Now it’s true that the sexism of otaku culture is differently sourced and connected than the sexism of American (and other Western fan) culture, and I know just enough to know that I am not at all qualified to talk about why or specifically how. That said, no amount of cultural relativism can make sexism not sexism, and so I don’t find the argument “Well, it’s just an anime interpretation of the character” (one I last saw cropping up when the DC Animated Heroine Series happened) to be very compelling. When a vegetarian says they don’t want to eat that hamburger, your argument that it’s really chicken teriyaki is not persuasive. They still don’t want to consume meat, even if they love both American and Japanese cuisine. Meat in this case is sexism. Cuisine is fandom. But this is not the point I’m trying to make.

You asked for feedback. And you got it. Happily (at least to me, having seen a lot of these threads go the other way) the large majority of commenters on the Facebook post are pointing out indignantly that the figurine captures nothing of Liara’s character, and would make more sense if it were depicting a completely different character of the same race, perhaps one who shows off her body professionally. So hopefully you’ll take the criticism to heart.

But this is also beside the point I’d like to make. Pointmaking commences now: Bioware. Please stop crowdsourcing, or giving the appearance that you are crowdsourcing on issues of gender representation and the appearance of your characters, specifically the female ones.

There’s an argument that could be made here; that you should stop crowdsourcing the appearance (or appearances) of your female characters because your specific crowd is more likely than average to listen to the Male Gaze, and we’ve talked about that before on The Mary Sue. But that’s not the argument I’m summoning for this particular post.

There are two interconnected reasons why companies crowdsource design decisions. The first is that they would like to leverage a committed, excited fanbase that they are confident will respond to requests for engagement. This is great, and I’m sure, Bioware, that this makes up the core of your motivation. But there’s the other half of the decision to consider. A company does not want to crowdsource something that it thinks may have a real impact on the way it does business: what if the crowd chooses something bad, something that they just can’t do? Think of the PR debacle of not choosing what the group that you looked like you were trying to engage and delight said was most popular. (See Oprah and Zach Anner, for example.) So if a company chooses something to crowdsource, it’s going to be an issue where they don’t really care all that much about the outcome.

This is the problem, Bioware. By notably crowdsourcing decisions specifically related to the appearances of your female characters, it makes it look less and less like you want to engage an excited fanbase, and more like you aren’t really invested in the outcome.

Worse, it also sort of makes it look like you can’t judge when an issue may wander you into the territory of overly stereotypical representations of gender and sexuality. If you’re willing to let the public decide how your characters will be interpreted by others, this would imply that you yourself are not completely invested in how your characters are interpreted. Crowdsourcing the appearance of your female characters also gives you reasonable absolution from blame that might be directed towards you by the way that you are representing the gender.

Just keep making games we want to play, please, and learn to take a deep breath and make these kinds of decisions yourself. You’ve done pretty well so far.