The Ongoing Saga of Commander Shepard’s Hair (Of All Things) 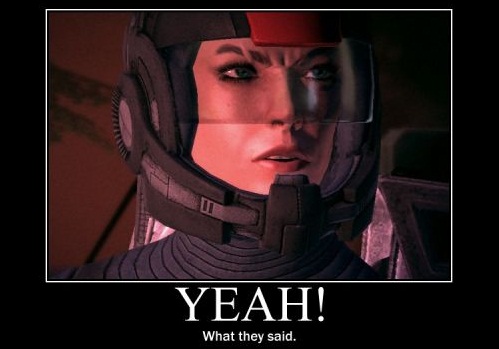 Over the past few weeks, you may have found yourself preoccupied with the color of Commander Shepard’s hair. If so, you likely fall into one of two camps.

You might find the whole idea of a sultry blond Commander Shepard to be ridiculous. The appeal of playing Shepard as a woman is that she isn’t some buxom, pouting space bunny with inconvenient armor. She’s a tough, do-or-die galactic soldier, for goodness’ sake. She was not born of the need for another fantasy object. She’s there to save the day. Commander Shepard exists within a galaxy in which her merits matter far more than her makeup. Replacing her with a younger, saucier version feels unnecessary and antithetical to everything that makes Commander Shepard great. The whole situation drips with male gaze, and it’s just unfair.

OR. You might find the implication that pretty blonde women can’t be heroes to be downright closed-minded. How about Buffy, or Samus, or Starbuck? Who says that you can’t save the day and look pretty, too? It’s like that scene in the extended Two Towers, where Aragorn chokes his way through a bowl of Eowyn’s soup. What, just because Eowyn (another blonde!) can use a sword, she can’t find her way around the kitchen, too? To say that a space-faring badass like Commander Shepard can’t wear makeup or get her hair done equates to saying that being a hero requires her to sacrifice her femininity. And that’s just unfair.

…you know you’re both right? Right?

If you have absolutely no idea what I’m talking about, let me get you up to speed. In the Mass Effect series, you play Commander Shepard, a high-ranking military officer and humanity’s last hope against an ancient machine race called the Reapers. The player has the option of playing Shepard as a woman (commonly known as “FemShep”) or a man (there are many monikers; I prefer “BroShep”). The choice in gender changes nothing about the story and very little about the dialogue, but everybody’s Commander Shepard is a little bit different. Thanks to the exceptional writing team at BioWare, the story choices are so diverse that it is rather unlikely you will ever meet another Mass Effect player whose story perfectly matches your own (executive producer Casey Hudson claims Mass Effect 3 will take in over a thousand storyline variables from your ME2 save game). While there are default models for both the male and female Shepard, players have the option to customize their Shepard’s appearance – from eyebrow size to nostril width.

To say that I am emotionally invested in Mass Effect is an understatement. Aside from having a gripping story, beautiful artwork and some of the smoothest gameplay I’ve ever encountered, Mass Effect came into my life during a rather difficult time. It may sound cheesy, but just as people draw strength from books and music, I do credit this series, in part, for helping me get through a rough patch.

So, yes. I care about Commander Shepard. Like, a lot.

BioWare reports that roughly twenty percent of Mass Effect players play as FemShep (seriously, guys, you’re missing out on some great voice acting by Jennifer Hale). This figure surprised me a little, as FemShep fans seem to be everywhere. Maybe it’s just the circles that I travel in online, but there seems to be a lot more FemShep fanart and costumes than homages to BroShep. Perhaps it’s because girls are the ones who tend to make stuff. Whatever the reason, if it is only twenty percent, that twenty percent is incredibly committed to this character.

Up until now, FemShep has never been part of BioWare’s marketing. She doesn’t appear on the box. She doesn’t appear in the trailers. It’s BroShep all the way. This never bothered me overly much, probably because I’ve come to expect that sort of thing. I did feel a twinge of disconnect whenever I saw BroShep’s rugged jaw in a new trailer. I’d make jokes to the effect of, “Hey, why’s Commander Shepard hiding behind that scruffy guy?” It was mildly irksome, but I didn’t love the game any less. Whoever that guy was in the trailers, he wasn’t my Shepard. I didn’t think it really mattered.

Back in June, BioWare announced that they would be including FemShep in the marketing for Mass Effect 3. I was surprised to find myself feeling triumphant. It hadn’t occurred to me before, but not having FemShep publicly featured did make me feel like I was being quietly shooed into the Ladies’ Room at the local saloon. Sure, there’s the same whiskey in there that they have out front, but the curtains are always drawn and you can’t join any poker games. Knowing that FemShep would have equal billing made me feel like we could break down the wall and all get drunk together.

I honestly hadn’t thought much about what the official FemShep would look like. I hadn’t anticipated there being a change at all. The default BroShep had been the same for the past two games. I figured they’d just use the default FemShep as well.

Last month, BioWare rolled out a Facebook contest to choose the official face of FemShep. I pounced upon the link the second it popped up on my Twitter feed. I sat back in my chair, blinked, and said aloud to no one: “Who the hell is that?”

For comparison, this is the default FemShep we’ve been given before. Now, a disclaimer. I know that for some, having a younger, foxier Commander Shepard was exactly what you were hoping for. For those that spent an hour in the character creation screen finding the perfect shade of lipstick, the new face of FemShep is right up your alley. And certainly, there’s nothing about any of those images that’s somehow bad. FemShep #6 looks rather like uber-cosplayer Holly Conrad, and nobody can argue that she makes a fabulous Commander Shepard in real life. If your Shepard wears makeup and has a sassy haircut, groovy. I support you in that, even though I feel in every fiber of my being that Commander Shepard is in her thirties, has practical hair and a great big scar, and is too busy fighting Geth to have time for eyeliner. I’m not saying that these new manifestations of Commander Shepard are necessarily wrong. I’m saying it’s an awfully big change, and for me, it’s not one that fits.

After the voting was done, blond FemShep had won by a landslide – twice as many votes as the runner up. A lot of people were pissed. Incensed, even. Keeping the twenty percent FemShep player demographic in mind, it appeared to some that the voting had a lot more to do with not who people wanted to play as, but who they wanted to get busy with. Other folks interpreted that reaction as an assertion that blonds in makeup can’t be taken seriously, and they were none too happy about that, either.

And so, people joined their respective camps.

Last Tuesday at GamesCom, BioWare announced that they were launching another round of FemShep voting, to be ongoing until PAX Prime. There are four FemSheps now, all identical except for the hair color (and interestingly, the redhead is currently in the lead). The reasoning, BioWare’s marketing folks say, is that people chose blond FemShep based on her hair style, not the color. Hence, the contest continues.

Forgive my lack of propriety, but I really can find no better response than this:

>>> Next Page (Batarians, Asari, and gender expression, oh my!)