Did Team Oprah Rig a Contest Against Zach Anner? We Investigate [Update] 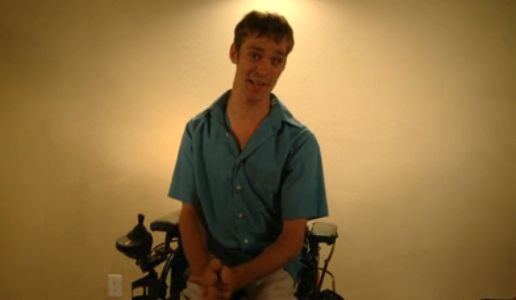 In case you don’t know, Oprah has been running a competition to give one lucky citizen the chance to have his or her own television show. Anyone can enter by submitting a tape, but then the tape must be voted up in an online poll to be in contention for earning its creator a series. One contestant, Zach Anner, suffers from cerebral palsy and wants to host a humorous travel show that would illustrate great trips that anyone can take. He has become an internet sensation via 4chan and Reddit, and for a week up until June 22 was the strong front-runner.

But in the span of an hour around or just before 3pm EDT, the woman who had been trailing Anner for some time, Doctor Phyllis, took the lead. And she did so at what sounds to be an unbelievable rate. The Huffington Post reports an increase of 300,000 votes in 20 minutes. Reddit reports 600,000 in an hour. Either way, the voting rates being bandied around are astounding, corroborate with what many Internet denizens who have been following the proceedings saw, and justly aroused suspicion.

At around 6pm EDT, a comment appeared on the Reddit post that the source code for Phyllis’ “Vote” button differed from that of all the other contestants. The first comment Geekosystem found reporting this claim was made on NowPublic at 5:32pm EDT.

At 8pm EDT, another comment appeared on NowPublic that claimed to show the specific difference in the coding. This comment was posted by a user going by the name b/rother, and it presented the following, reformatted here for easier reading:

That extra number was labeled in the add_vote function as “eid,” which frequently stands for “employee ID” and could in theory allow for behind-the-scenes vote manipulation by an OWN employee.

… sending the following request to the server, which, straightforwardly enough, adds a vote.

Update 1: Astute commenter Travis Wright, who is the creator of the chart below and continues to graph the voting (expect further updates), has written in our comments that EID in this instance stands for Entity ID, and the profile on Oprah’s site with the EID number 208260549 is LillianSkincare. The user has no followers and follows no one, and has no recent activity. Here is a link to the profile page. The EID can be seen at the end of the URL. It is unclear what this signifies at this point.

Around 12:00am EDT on Reddit, a comment appeared stating that the code for Phyllis had become identical to that of the others. Our own data, coming up shortly, suggests that by this time the weirdness in voting had stopped. And the fact that this code change falls in a window that coincides with the time Phyllis’ voting slowed down leads Geekosystem to believe that the code difference corresponded with some very strange patterns which mysteriously stopped later.

If you click the tiny chart to the right or right here, you will be linked to the full size image. This chart was posted anonymously on 4chan — which is a Zach Anner stronghold and not always to be trusted regardless — but it largely corroborates with our own independently collected data. It shows that, mathematically, it would fit nearly perfectly with for that mysterious coding to have given Phyllis two free votes every time Zach received a vote, in addition to the votes Phyllis otherwise received. But while the math seems to work well for most of his time window, there is no way to confirm this algorithm was actually implemented, especially now that the coding for the button has been reverted to its original form.

The suspected time of revert is between 10:00p.m. and 10:24p.m. EDT. Starting at 6:06p.m. EDT, Geekosystem took a screenshot of the voting totals on Oprah’s competition site roughly every 15 minutes. From 6:06 to 10:24, Phyllis consistently received more votes than Zach in each interval. Notably, though, these numbers were slightly inconsistent with the theory posited in the above chart, as Phyllis’ increases were often a bit less than double Zach’s.

Update 2: Travis Wright has provided us with a new chart that shows the time of the voting code revert was nearly exactly 7p.m. PDT, or 10p.m. EDT. You can click on it to the right, or here, to see it full size. It also shows that a new vote-altering algorith may have been recently implemented. (Note: In the chart graphic, the expected ratio written is that Phyllis gets one extra vote for every two Zach gets. Travis has informed us that the ratio is actually closer to Phyllis getting two votes for every three Zach gets.) Foul play may still be afoot, though we have verified that, if the coding has been changed, it was not done in the same way it was before.

Here is the number of votes per minute each of the top 9 total vote-getters (as of the time this was written) received between 6:06p.m. and 10:24p.m. EST on June 22. These are ranked by votes per minute in this time period, not by standing in the overall competition.

At 10:24p.m. Phyllis’ increase rate plummets. Here are the rates for votes per minute from 10:24p.m. EST to 12:26a.m. EST, a span lasting roughly two hours from the suspected revert time. These are kept in the same order as presented above, for easy comparison.

Yes, Phyllis dropped from 1923 votes per minute to 3 votes per minute some time between 10:00p.m. and 10:24p.m. EST, while nobody else’s rate changed by anywhere near the same number of votes. This doesn’t just happen out of nowhere, and the button source code swap, knocking out the ‘eid’ value, is the leading suspect right now. If things continue at the current rate, post-revert, Zach will have no problem catching up with and surpassing Phyllis in the overall vote. As we write this, he trails by less than 300,000 votes.

Update 1: At the time of this first update, Zach has just closed the gap to under 3,000 votes.

Update 2: About ten minutes since the last update, and Zach has now taken the lead, and is winning by roughly 3,000 votes.

If you want to see for yourselves and get more exact numbers, the screenshots we took can be viewed here on Flickr. Just hit slideshow and you can track the increase rates. (Be sure to click “Show Info” after the slideshow begins so you can see the time for each photo.)

Update 3: Chart-master Travis has brought us another graph, showing the pivotal moment when Zach reclaimed the lead. It also shows the 3 to 2 vote-alteration algorithm more clearly. As always, click to the right or here to see it full size.

But perhaps now would be a good time to point out that none of this matters in terms of the contestants’ fates. Here is an excerpt from the FAQ of Oprah’s contest site:

Yes, it turns out that in theory, coming in first or second doesn’t actually matter at all in terms of whether Zach would eventually get his own show or not. But in practice, there would be a much bigger backlash if Oprah anointed someone other than Zach to be the winner of the contest if he was in first place than if he was in second or lower, whether that person was Dr. Phyllis or anyone else. And on principal, it still matters whether a poll run by a celebrity brand of Oprah’s stature is being rigged to favor one contestant over the others. We hope that OWN will release a statement explaining their side of the story — we’ve tried getting in touch with them several times, but have not received a response — but we’re not holding our breath.
Update: OWN has given the following statement to EW: “The online voting rules for the ‘Your OWN Show’ video submission competition were carefully crafted to be fair to everyone. Any allegations of impropriety will be investigated and the appropriate actions taken to keep the process unbiased.”
https://www.themarysue.com/zach-anner-rigged-votes-oprah/?preview=true&preview_id=21635&preview_nonce=a48872b1e8