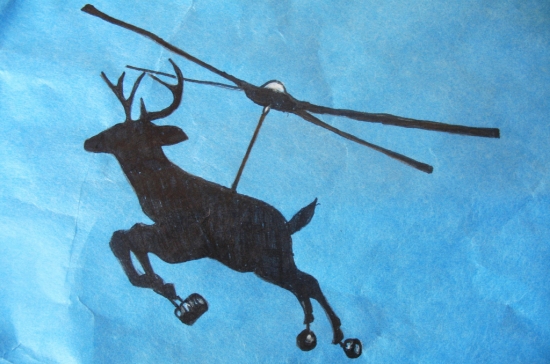 A mother deer and her fawn became stranded on the ice of a frozen lake in Antigonish Harbour, Nova Scotia, and the situation looked dire. The deer struggled to stand and repeatedly fell back to the ice and appeared to be getting exhausted. The Department of Natural Resources was called, but the ice was too thin to safely go out after the animals. That’s when DNR pilot David Farrell flew in to save the day. He carefully piloted a helicopter above the ice and used the air pressure from the rotors to blow the deer safely back to shore. The video is pretty impressive.

Retired biologist Ian Waugh got a call from a neighbor alerting him to the situation with the deer on the ice, and they both called the DNR. Additionally, Waugh grabbed his camera and started filming. This is what he captured:

Farrell said that the air from the rotors seemed to calm the deer as it was blown across the smooth surface of the ice. As it skated across the ice, he said, it stopped struggling and just glided to safety. “I don’t know if it knows you’re trying to help, or what’s going through its mind, but it works good,” he said in an interview with CTV.

There have been reports that the mother and fawn were spotted together at least once after the event, so it looks like everyone involved is doing fine.

How’d Farrell think to use the rotors to push the deer? Turns out he’s used this trick once before to rescue a different deer that was stranded on ice. At least we think it was a different deer, as Waugh pointed out in a phone interview with CTV that deer all look, “[s]urprisingly the same.”

Farrell is surprised by all the attention he’s getting after the video, but he should probably get used to it, since he’s more or less cemented himself as Canada’s go-to-guy for blowing deer around the ice with a helicopter.

(via CTV and Telegraph, image via Rakka)