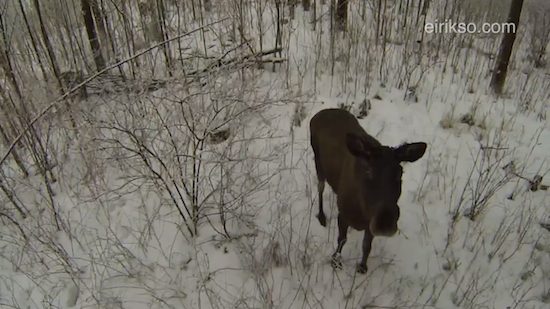 Winter is a notoriously dull time of year for many people living in Norway, since there’s not much one can do when everything is covered in a white blanket of snow. That is aside from the country’s time-honored recreational activity: Sending out quadcopters rigged with video cameras to spy on the local moose population. Do they appreciate this unsolicited attention? Probably not, as moose are incapable of human levels of speech, but that should by no means stop you from watching some Norwegians laughing at a curious moose as though it were some cheeky Monty Python sketch.

The video was shot by Eirik Solheim, a multirotor helicopter enthusiast who happened upon the inquisitive beast just outside of Oslo, where moose are a common sight for people living in the surrounding area. Since being uploaded to the Internet, the video’s gone all kinds of viral and proves that, like our friends out in Norway, the rest of the world appreciates the majestic grandeur of the common moose.