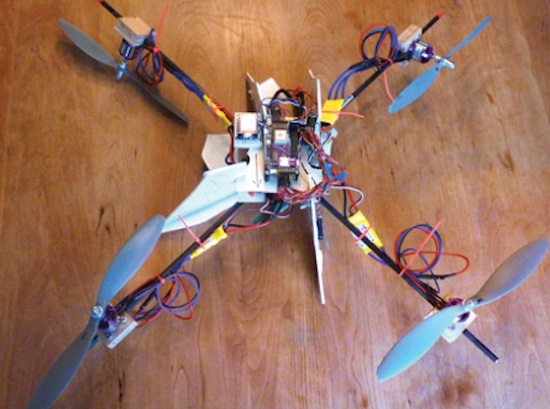 Tired of walking your kid to the bus stop every morning? Inventive dad Paul Wallich was. That’s why he outsourced the gig to a quadcopter keyed in to track a GPS beacon stashed in his son’s backpack. The result is a pretty amazing piece of high-tech parenting — a flying drone that can follow his child from a set distance and make sure the kid stays out of trouble.

Wallich shared the details behind his design with engineering magazine IEEE Spectrum, but the project is actually a pretty simple one — the copter is a fairly standard build that Wallich got airworthy easily. Getting the gizmo to follow his kid was a little more tricky, as an RFID solution would have necessitated a burlier antenna than the small craft could comfortably carry. Instead, Wallich used a navigation program that kept the copter a set distance away from the GPS beacon it was following. He even strapped a camera unit to the thing for full eye-in-the-sky capability.

We do worry about this kid’s overall safety, though mostly on a small scale — frankly, having a homemade helicopter that dad built in the garage follow your kid to the bus stop every day sounds like about the best way we’ve ever heard to ensure that your kid is regularly stuffed into a wide variety of lockers since severe acne. Of course, a better-armed companion drone could put that sort of behavior to bed in short order. Not that we’re encouraging that sort of anti-social behavior. Just an observation.