British Armed Forces Use Smallest, Most Adorable Drones of All 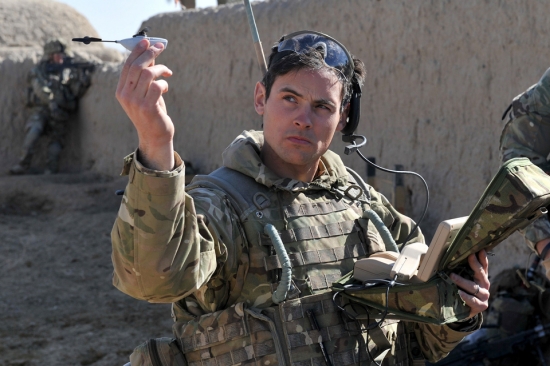 Something that’s called The Black Hornet Nano Unmanned Air Vehicle sounds like it would be terrifying, but measuring in at about four inches long and weighing a scant 16 grams, it borders on being downright cute. The Black Hornet’s diminutive scale doesn’t stop it from aiding British troops in Afghanistan in seeking out enemy targets and checking if an area is safe before entering. This once again proves that it’s not the size of your drone that matters — it’s how you use it.

The Black Hornet is about as big as one of those toy helicopters you can buy from a mall kiosk during the holidays, but it’s shockingly well equipped for its size. An onboard camera can be used to capture still images as well as full motion video and then broadcast those images back to a handheld monitor.

Unlike a toy, the Black Hornet can withstand windy conditions, travel at a top speed of 22 mph with a half mile range, and remain in flight for as long as 30 minutes. All that comes at a price though. Britain’s Ministry of Defence has a £20 million contract with the manufacturer for 160 Black Hornets. A quick currency conversion and some math put the price tag at just under $200,000 per drone.

An MoD spokesperson confirmed that British troops have been using the Black Hornet since last year, and they’re already relying on the device to assist them in combat. Sergeant Christopher Petherbridge of the Brigade Reconnaissance Force said:

Black Hornet is definitely adding value, especially considering the lightweight nature of it. We use it to look for insurgent firing points and check out exposed areas of the ground before crossing, which is a real asset. It is very easy to operate and offers amazing capability to the guys on the ground.

The Black Hornet fits in with the Ministry of Defence’s 10-year equipment plan, which focuses on intelligence, surveillance, and reconnaissance systems. It may be little, but it’s fierce.