When the Supreme Court issued its decision on the Affordable Care Act, colloquially known as Obamacare, it was kind of a big deal. As with all big deals, people immediately took to Twitter and started yammering about it. Not only was the court’s decision a bit contentious depending on your particular political leanings, but CNN and Fox News actually misreported the “Constitutional” ruling as “Unconstitutional,” which just added conversational fuel to the fire. All told, the tweeting topped out at around 13,000 Tweets per minute, or roughly 216 per second, practically nothing compared to current record holders.

According to @gov, the 13,000 Tweets per minute and the distribution looked a little something like this: 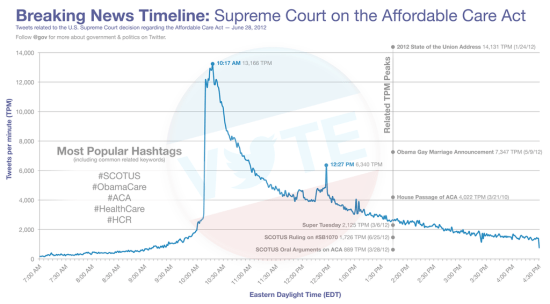 Sure, it looks like a huge spike, but when it pales in comparison to recent pop culture phenomena. When Beyonce announced that she was pregnant, for example, the news hit around 8,000 tweets per second, or 532,080 per minute if you want to the numbers on even footing (assuming it kept up at that rate; it almost certainly didn’t, but still).

Likewise, the Super Bowl had a 12,000 tweet per second peak, that’s almost as many as SCOTUS inspired in a whole minute. And all that looks paltry compared to the current record holder: An airing of the film Castle in the Sky which conjoured up a whopping 25,088 tweets in a second.

Why so low? It could be any number of factors: A Supreme Court decision isn’t the easiest thing to digest and comment; this was chiefly of interest only to United States citizens; some people probably aren’t too keen on broadcasting their political opinions into cyberspace; and, frankly, a lot of people probably just didn’t know or care.

When it comes to content, the social media analysis firm Crimson Hexagon took a look at 130,000 of the ACA-related tweets that went out over the course of the day and found that 48% were in support of the Court’s decision, 29% were calling for repeal, and 22% were neutral where politics are concerned. What percentage of the tweets were jokes, however, is unknown, but I think we can all agree that it probably wasn’t enough.

Twitter definitely did blow up when things went down, and if you run in the right circles, you totally felt it. It just turns out that, in retrospect, it was a little less like a thermonuclear explosion and a little more like an M80.