Paralyzed Man Fighting To Be Euthanized Uses His Eyes To Tweet 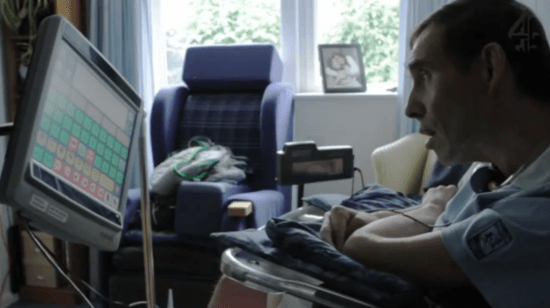 Tony Nicklinson is completely paralyzed. Due to a stroke, Tony is unable to move any part of his body except for his eyes. While he retains all his intelligence and powers of reasoning, he’s been cut off from all conventional means of communication with the world. He finds the condition unbearable enough that he’s actively engaged in a legal battle, attempting to secure the right to end his own life. Oh, and also he’s on Twitter; he tweets with his eyes.

Tony is the subject  of an upcoming special by Channel 4 Dispatches that will discuss his life as sufferer of locked-in syndrome — the name for the hellish condition where a person with a fully functioning mind is effectively trapped in a completely non-functional body — and his attempts to gain the opportunity to end that life. In the meantime, however, Tony has taken to tweeting and uses a device that tracks his eye movements on a virtual keyboard. Tony sent out his first tweet a few days ago, and racked up 2,500 followers in just a matter of hours. Since then, he’s upped his number of tweets to 7 and his number of followers to over 8,000. He’s very good at Twitter.

The special about Tony is set to air on June 18th and is bound to be as decisive as it is fascinating. You can follow Tony on Twitter at @TonyNicklinson, and you can watch some footage of his first tweet below.