Ho hum, another ridiculous drive-thru prank. Must be Wednesday. 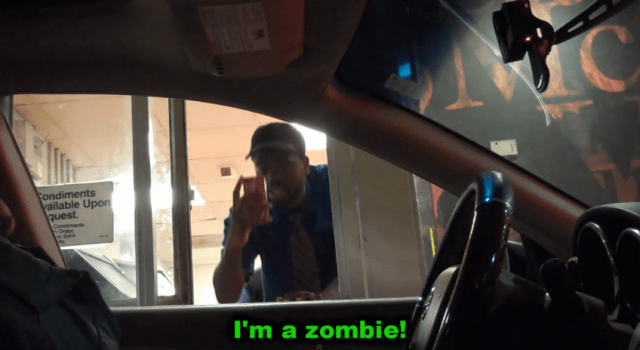 We’ve featured YouTube magician Rahat Hussein on Geekosystem a few times, now. Over the past few months he’s put out several videos of his “invisible driver” prank, where he uses his car seat costume to trick drive-thru employees into thinking that there’s no one  driving the car. That can get old quickly, though, so clearly the only logical next step was for him to put a headless mannequin costume and have fellow YouTube prankster Ed Bassmaster dress up like a head-chewing zombie in the passenger seat. You know, like you do.

Many online are calling this his best prank yet, and the video’s already gotten upwards of 270,000 views. I’m just not feeling it this time, though. Ed’s a Youtube celebrity in his own right, but he spends a lot of the video saying stupid things like “Hi, I’m a zombie,” and pretending to throw the head at the poor fast food workers. At one point Rahat gets out of the car and climbs into the window, and while the two guys working seem okay with it, if it were me that guy would actually be headless right now.

Rahat’s local fast food joints seem to be getting kind of tired of his shenanigans, too, because a good chunk of them close the window without responding. Props to the one woman who asks, “What kind of sauce, baby?” without skipping a beat, though. Clearly that lady has seen it all.

Relevant to your interests: