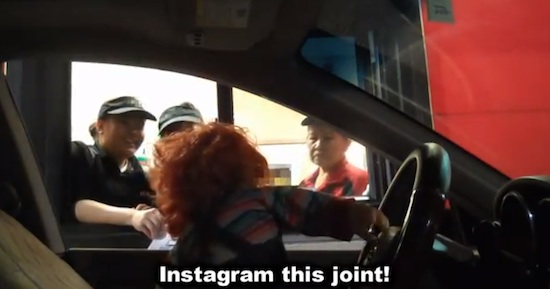 We’ve brought you magician and YouTube Prankster Rahat Hussein‘s videos — like the Invisible Driver prank — before. He’s added a new twist to the trick in his latest video, which features a Chucky doll (well, technically a Good Guy doll, but who are we to split hairs?) in the driver’s seat of a car ordering fast food. If, like us, though, you were kind of wondering when fast food workers in Rahat’s neighborhood would grow bored with his shenanigans — wait no longer, as a car driven by a murderous doll is no longer enough to unnerve people working a drive-through window. They’ve seen things, man.

While there are a couple of decent jumps, most of the folks in the video seem pretty old hat at dealing with Rahat’s unorthodox comings and goings — from preparing to “Instagram this joint!” to giving a hearty “I’m on YouTube!” to the camera. Indeed you are, sir. Well played.

Whether it’s due to the popularity of Rahat’s videos or the experiences of their co-workers, the doll stunt doesn’t seem to get these old hands too worked up. Several places even seem to have a protocol in place for Rahat’s visits that involves just throwing the bag of fast food into the car, which we assume means Rahat isn’t ordering a lot of milkshakes lately.