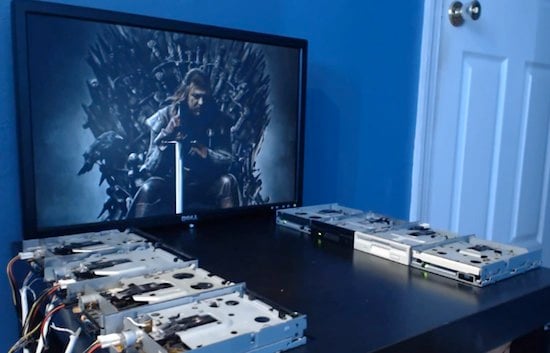 At Geekosystem, we feel honored to have witnessed the birth of floppy drive music. In the past few months since renditions of popular songs performed on antiquated removable memory became vogue, we’ve brought you some excellent examples of the newly minted genre. Sadly, this latest one — featuring the theme song from HBO’s Game of Thrones — leaves a lot to be desired. Unless you desire what sounds like old xerox machines farting uncontrollably.

That’s not to say that MrSolidSnake745’s rendition isn’t a technical achievement. Whatever his setup, he’s able to churn these things out in a matter of days. And sometimes, he really blows them out of the park. The Doctor Who theme, for instance, was a shining example of floppy drive music.

This one, however, seems to be outside the lowest range of the drives, giving portions of the song a grating drone. There are a few transcendent and surprising moments, but it falls down again in the face of a few syncopated beats. Still, worth a watch.

Before viewing, I highly advise turning your volume down a smidge.