HBO Passed On The Walking Dead Because It Was Too Violent. Have You Met Game of Thrones? 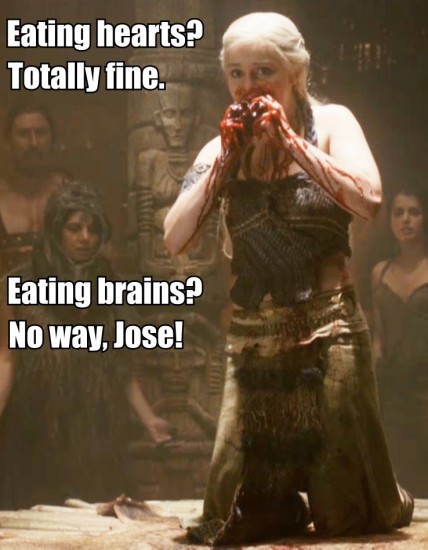 Robert Kirkman’s television adaptation of his comic, The Walking Dead, was shopped around to several networks before finding a home at AMC. I could understand zombies being a tough sell at any network considering what goes into making them but that’s not the reason folks like NBC and HBO passed. No, they passed because they feared The Walking Dead was too violent.

Emmy-winning makeup effects artist and recently appointed co-executive producer of The Walking Dead, Greg Nicotero, did an interview with The Huffington Post where he discussed, among other things, how the TSA ignore his fake-blood splattered shoes at the airport.

“They’re far more concerned with whether I still have loose change in my pocket before I got through their scanner,” he told them. “The fact that my shoes make it look like I may have just killed someone prior to arriving at the airport is really none of their concern. But making sure that I don’t have any metal on me before I go through their X-ray machine, that’s important.”

But Nicotero finds himself constantly surprised at the mainstream success the show, which he considered to be in a niche market and says executive producer Gale Anne Hurd played a big part in that. Most especially when she wouldn’t budge on the show’s content. Apparently both NBC and HBO were thinking of picking it up but asked her if they could tone down the violence and gore. She said no and they brought the project to other networks. “Thank goodness we wound up at AMC,” said Nicotero. “They totally get this show.”

Are you as surprised as I am HBO would have asked them to tone down the violence? NBC I can understand but HBO has a long history of violence in their original series.