The Walking Dead Recap: Who's The Sick One? | The Mary Sue

The Walking Dead Recap: Who’s The Sick One? 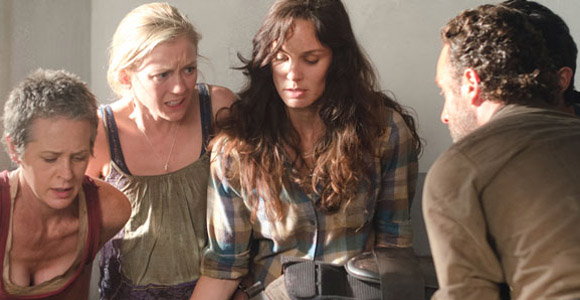 Last week, AMC’s The Walking Dead came back with a bang (plus a few squishes) and we were generally pleased. Did the second episode keep up the pace?

[Spoilers ahead, of course.] It’s such a relief to see that zombies are actually a part of The Walking Dead again. The survivors had a respite from them for most of last season which made for really boring television. But the creators have listened and given us lots of great (read: gross) zombies in the last few episodes.

We start exactly where we left off, with five prisoners staring at our survivors, who had just finished hacking off Hershel’s leg. Daryl immediately goes on the defensive but it turns out the prisoners also have weapons. But no one really has time to figure out what this all means as they want to make sure the old man doesn’t bite it. Luckily Hershel had been giving Carol some medical lessons so she could help him with Lori’s birth when it came time so she was able to give them some direction when it came to the injury.

It’s been a while since the survivors ran into anyone alive and things didn’t go so well the last time. But the difference here is, the prisoners have no idea how bad things had gotten on the outside. Even though they’re all on edge, it’s a really heavy moment when they realize, no, they can’t use someone’s cell phone to call their loved ones. However, they do seem to get over the fact they’re criminals pretty quickly when they try and claim the prison all their own. And Rick is all, “Look at my face. Does this look like the face of a man who won’t kill you for getting in my way?” More on that later.

After some puffed up chests, Rick makes a deal with the prisoners to help them clear out another cell block to call home in exchange for half their food supply. And it turns out, they have a whole lot of food. They also have a really gross walk-in freezer bathroom in case you were wondering.

Back in the makeshift emergency room, everyone is worried Hershel will die and come back a zombie. They stick him in handcuffs but they insist on getting super close and even laying all over him to make it really easy to bite them regardless. Eventually he stops breathing, and so does everyone else until Lori gives CPR a try. And I swear to god this whole thing was just so Hershel could get some tongue action because it totally looked like he was trying to make out with her when in fact, it was the creators trying to make it look like he was eating Lori’s face off.

And then…all hell broke loose. Our survivors were already giving the “lead prisoner” the stink eye for having his own ideas and not immediately ceding his position to them but when he went and pushed a walker directly into Rick, that was the last straw. Lori had previously told him to do what he needed to do…with a clear conscience…and apparently that meant a machete to the skull. Another big “holy crap” moment, especially for those who read the comic book and are seeing Rick go down a very different path. And it doesn’t end there. When one of the other prisoners runs because, hey, you just killed the shit out of my friend, Rick chases after him like Jack Nicholson from The Shining and locks him outside with the walkers. Can we even call Rick a hero anymore? And if not, what the hell is going on with this show?

Another one of the prisoners was killed by “lead prisoner” after he was cut/bit by one of the walkers so now we’re down to only two new cast members but Rick gives them their own cellblock and washes his hands of them for now. Because living people are a dime a dozen these days.

So did I actually like this episode? Yes but a lot in it really rubbed me the wrong way. Actually, it was just Rick who rubbed me the wrong way but Carl isn’t doing himself any favors by going into snotty teenager mode either. Maggie had some great emotional moments, especially when telling her father she didn’t need him to protect her anymore and so did Beth when she started modifying Hershel’s pants. Carol decided to pick out a walker to dissect in order to learn more for Lori’s possible cesarean section but instead of killing the other walkers around the fence, Glenn trails them off in the other direction by making loud noises. Because that makes total sense. And what seemed to be a possible mending of fences between Rick and Lori turned into a nice pat-on-the-back-I’m-going-to-go-throw-up-now moment. Oh, and no Andrea or Michonne this week.

Ok, so maybe I didn’t like this episode after all.