Don’t Get Cocky: Harrison Ford Rumored to be Returning as Han Solo in Episode VII 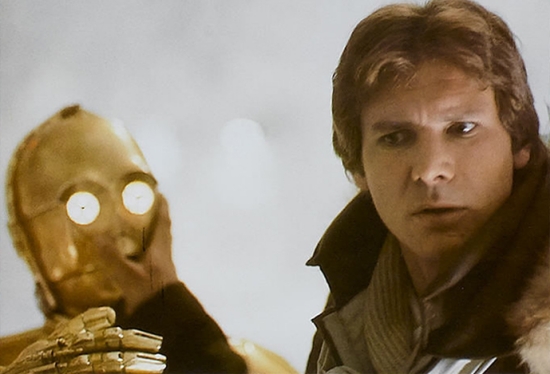 Somebody fired a proton torpedo into the Internet’s thermal exhaust port today, because it blew up with the story that Harrison Ford will definitely be returning as Han Solo in Star Wars: Episode VII. The source of the story is El Mayimbe from Latino Review, and he dropped the news on Fox News Latino, but so far there’s been no official word from anyone actually in a position to make a definitive statement. Maybe we should all just take a breath here.

Apparently, the Force is pretty strong with Mayimbe in regards to getting the jump on this kind of information, but I’m not ready to really call it confirmed until I hear it from Ford, J.J. Abrams, Disney, or Nick Offerman. Offerman is in no way attached to the Star Wars franchise, but I find him to be incredibly trustworthy, and I’d believe anything he says.

This is not a difficult rumor to believe, since Ford himself has already said he’d be game for putting on the blue vest once again to reprise his role as Han Solo, and it’s certainly something fans would love to see.

Beyond Ford’s return, which Mayimbe calls a “done deal,” he also speculates that Ford will get his thirty year wish of seeing Han Solo killed off in the films. That’s purely speculation on Mayimbe’s part, but considering the stories of Ford lobbying for his character’s death in the past, there could be something to it. You can watch the full clip below:

As long as we’re speculating wildly though, I’m going to go ahead and say that I’m speculating Episode VII is really just going to be a bottle episode where Han, Luke, and Leia fall into the belly of Sarlacc and throw to clips of the original trilogy while they are slowly digested over 1,000 years. Again, that’s purely speculation on my part. If I can confirm it to be true I’ll have Nick Offerman announce it at a press conference.

(via Latino Review, image via Pineapples101)