And other nonsense things. 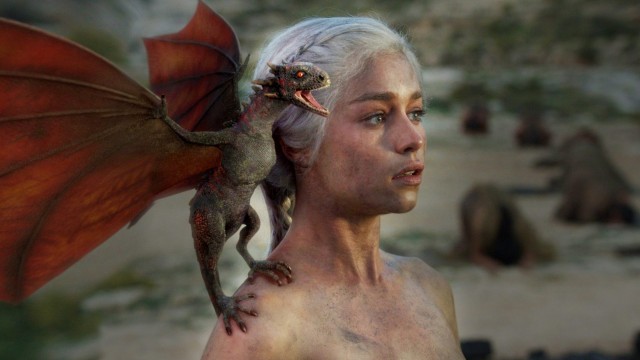 [Editor’s Note: A reminder to head off certain comments. In our post “We Will No Longer Be Promoting HBO’s Game of Thrones,” I wrote “from this point forth there will no longer be recaps, photo galleries, trailers, or otherwise promotional items about Game of Thrones on The Mary Sue. The newsworthiness of other items will be discussed by the editorial team on a case by case basis.” This is one of those items. To find out more about support options available for survivors of sexual abuse, visit the official website for RAINN, the nation’s largest anti-sexual violence organization.]

A Song of Ice and Fire novelist George R.R. Martin had been keeping quiet about the latest controversy surrounding the HBO adaptation of his work, saying only that “David [Benioff] and Dan [Weiss] and Bryan [Cogman] and HBO are trying to make the best television series that they can. And over here I am trying to write the best novels that I can.”

However, Entertainment Weekly has seemingly skirted his stance by asking him about the sexual violence against women in the book series instead (though their title suggests they asked about the television series, which I’m sure will confuse the issue a ton). Martin told them,

The books reflect a patriarchal society based on the Middle Ages. The Middle Ages were not a time of sexual egalitarianism. It was very classist, dividing people into three classes. And they had strong ideas about the roles of women. One of the charges against Joan of Arc that got her burned at the stake was that she wore men’s clothing—that was not a small thing. There were, of course, some strong and competent women. It still doesn’t change the nature of the society.

Let’s take a pause her to discuss the LiveScience article, “How Real Is the ‘Game of Thrones’ Medieval World?” Writer Stephanie Pappas says,

Middle Ages are roughly defined as the time between the fall of the Roman Empire in A.D. 476 and the Protestant Reformation, which began in 1517 and wrapped up around 1648, though historians do quibble about the exact definition of “medieval.” Regardless of the actual dates, 1,000 years is a long time, and Europe is a big place, so generalizations about “medieval times” are hard to make.

Second, Martin’s fantasy world is a gritty twist on the high fantasy settings first popularized by J.R.R. Tolkien’s concept of Middle Earth. Comparing Westeros with real medieval Europe is not intended as criticism of the stories; fantasy is obviously not concerned with historical accuracy.

Now back to Martin’s words on EW, touching upon the often used criticism “there’s dragons and magic and zombie-like creatures,” so playing the historical card isn’t a logical excuse for other things:

Now there are people who will say to that, ‘Well, he’s not writing history, he’s writing fantasy—he put in dragons, he should have made an egalitarian society.’ Just because you put in dragons doesn’t mean you can put in anything you want. If pigs could fly, then that’s your book. But that doesn’t mean you also want people walking on their hands instead of their feet. If you’re going to do [a fantasy element], it’s best to only do one of them, or a few. I wanted my books to be strongly grounded in history and to show what medieval society was like, and I was also reacting to a lot of fantasy fiction. Most stories depict what I call the ‘Disneyland Middle Ages’—there are princes and princesses and knights in shining armor, but they didn’t want to show what those societies meant and how they functioned.

Let me reiterate this bit first: “Just because you put in dragons doesn’t mean you can put in anything you want.”

Actually, that’s literally what it means. You don’t want to write about an egalitarian society? That’s your prerogative—it’s your story to tell—but don’t pretend like the two items couldn’t co-exist if you actively chose to utilize them. It’s the fantasy genre. By its very definition, it includes things like imaginary realms and creatures all thrown into one, and we’d like to think the author is intelligent and imaginative enough to see the difference between something like “less rape” and “people walking on their hands.”

But, as Martin himself reiterates, “I wanted my books to be strongly grounded in history and to show what medieval society was like.” Let’s go back to LiveScience here:

Women did occasionally rise to power in the Middle Ages, but it was Henry VIII who brought them a dubious kind of equality: His wife Anne Boleyn was the first woman put to death for treason, said John Ashdown-Hill, an independent medieval historian involved in the real-life search for Wars of the Roses victim King Richard III.

For women in Martin’s novels and the HBO show, sexual violence is a constant specter, with rape an everyday threat for many of the female characters. No doubt such violence existed in the Middle Ages, historians say, but women had some protections. Muslim armies rarely raped conquered populations, because rape was an unforgivable crime in Islam, [Kelly DeVries, a medieval historian at Loyola University Maryland] said. Christian armies had slightly less-stringent religious prohibitions, but women were more protected than commonly depicted in popular culture, he said. The uptick in sexual brutality actually occurred after the Middle Ages, during the Wars of Religion kicked off by the Protestant Reformation, he said. In those conflicts, opposing sides saw each other as heretics and thus felt free to commit brutalities.

Rape was not accepted as a fact of civilian life, either, though the definition of sexual assault was limited. In early-medieval England, only a previously chaste or virgin women could prosecute a man for rape. In 1285, Edward I’s parliament changed the definition of rape to allow for prosecution of men who raped nonvirgins, and allowed women to bring suit against attackers themselves instead of through a male relative.

The legal change suggests that rape was, indeed, seen as a serious crime in medieval Europe. But just as today, convictions could be hard to come by. Between 1208 and 1321, 49 percent of rape accusations brought to court ended up with the alleged victim arrested for false appeal, according to a 2009 master’s thesis by Emory University student Stephanie Brown. In practice, patriarchal society was unable to cope with women bringing legal accusations against men in court, Brown concluded.

Yes, rape did occur “back then,” but we don’t have accurate statistics about how often. “Every 107 seconds, another sexual assault occurs,” is one we have for the year 2015. Also, rape is not the only way in which women are oppressed or victimized. And women are not the only ones who are raped.

I’m writing about war, which what almost all epic fantasy is about. But if you’re going to write about war, and you just want to include all the cool battles and heroes killing a lot of orcs and things like that and you don’t portray [sexual violence], then there’s something fundamentally dishonest about that. Rape, unfortunately, is still a part of war today. It’s not a strong testament to the human race, but I don’t think we should pretend it doesn’t exist.

Here’s the rub: We don’t want to pretend it doesn’t exist. We want it to be discussed so that we can continue the conversation of rape as a despicable act, one many still don’t understand fully (see: commenters telling us Sansa’s assault wasn’t rape because she was married). To Martin’s credit, while there is an enormous amount of rape in his novels, he at least shows there are some consequences for it in the world he created (men being sent to The Wall for committing the act). But when the discussion turns from how bad the act is to how bad your usage of it is ( and “the only women who get vengeance on their rapists are villains” [Edit: Commenters saying Maester Kerwin may have been but I can’t find concrete reference if anyone has something to share to that end. Still, one out of 214. Not great for realism claims. Edit #2: I’ve transcribed the Kerwin account in this comment.]), the conversation gets muddled, and that’s why so much discussion has happened surrounding HBO’s Game of Thrones.

A good portion of the critiques toward Martin and the creators of the HBO adaptation are not that rape is used at all in the creations, but that it’s a lazy trope to fall back on. Kathryn Gravdal says the purpose of her book, Ravishing Maidens: Writing Rape in Medieval French Literature and Law, is “to scrutinize the cultural ideology that supports rape as a stock narrative device in various medieval genres.” She goes on to say,

How does it happen that the representation of sexual violence is built into a variety of medieval genres and what purpose does it serve? Literary critics from various fields are today engaged in a polemic over the function and meaning of rape in its textual representation. Depicting, narrating, or representing rape certainly does not constitute an unambiguous gesture of endorsement. But it is crucial to ask of a historical period whose literature is enthusiastically given over to the idea of Woman: why then is rape a stock device in so many genres and what is the relation genre bears to gender? … The absence of a literary history of rape in medievalist criticism may reveal more about modern attitudes toward sexual violence than it does about the supposed medieval indifference to it. It definitely reveals that certain ambiguous ways of discourcing on rape, forged in the Middle Ages, still function effectively (and invisibly) today.

As you can imagine, many have written on this in the past and as you can see here, I could probably fill up a paper of my own on the topic. I write about pop culture for a living, and so I’m especially aware of the power our entertainment can have on us. Fiction can absolutely create important dialogues on real world issues and it has since the start of fiction. But that also means fiction isn’t always going to get it right and in the case of sexual assault in TV, fiction gets it wrong most of the time. As I told the NY Daily News recently when discussing this topic, “Our stance is not that sexual assault can’t or shouldn’t be in TV ever, it’s that we want creators to really think about how they are portraying those crimes and the affect they have on the survivors.” That goes for all creators.