Not Content With What He’s Already Done to Us, George R.R. Martin is Considering Another Shocking Thrones Twist 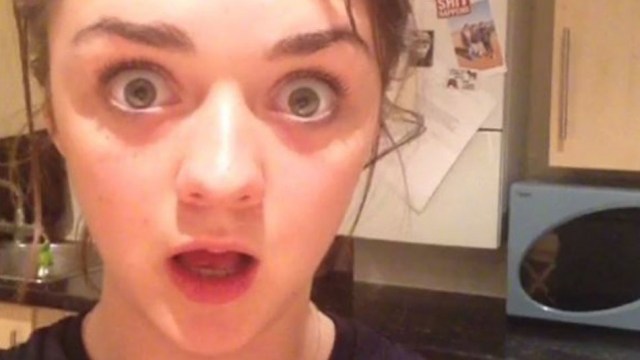 Don’t worry, there’s no specifics as to who or what this is about exactly, it was just that Maisie Williams’ Red Wedding reaction face was too perfect to pass up.

Speaking with Entertainment Weekly about his recent dedication to getting The Winds of Winter done as soon as he can, George R.R. Martin said getting it out before Game of Thrones Season 6 (which he won’t be penning a script for for this very reason) “has been important to me all along… I wish it was out now. Maybe I’m being overly optimistic about how quickly I can finish. But I canceled two convention appearances, I’m turning down a lot more interviews—anything I can do to clear my decks and get this done.”

In one intriguing new wrinkle, Martin says he just came up with a big, revealing twist on a long-time character that he never previously considered. “This is going to drive your readers crazy,” he teases, “but I love it. I’m still weighing whether to go that direction or not. It’s a great twist. It’s easy to do things that are shocking or unexpected, but they have to grow out of characters. They have to grow out of situations. Otherwise, it’s just being shocking for being shocking. But this is something that seems very organic and natural, and I could see how it would happen. And with the various three, four characters involved… it all makes sense. But it’s nothing I’ve ever thought of before. And it’s nothing they can do in the show, because the show has already—on this particular character—made a couple decisions that will preclude it, where in my case I have not made those decisions.”

FOUR CHARACTERS?? George, don’t you dare Red Wedding us again. I don’t think my heart could take it.

For what it’s worth, I think he’ll get the next one out in time (you can check out the newest Sansa preview chapter here). Part of me is still hoping it will be released on the first day of winter because that would just be wonderful. But what do you think about his maybe shock?

Though if I’m being honest, those shocks are one of my favorite things about his A Song of Ice and Fire series but now I’m just going to be anticipating the shock through the entire read! And he didn’t even specify it would happen in The Winds of Winter, it might not be until A Dream of Spring.