George R.R. Martin Will Forgo San Diego Comic-Con so He Can Finish Winds of Winter for You White Walkers

Winds of Winter is coming. 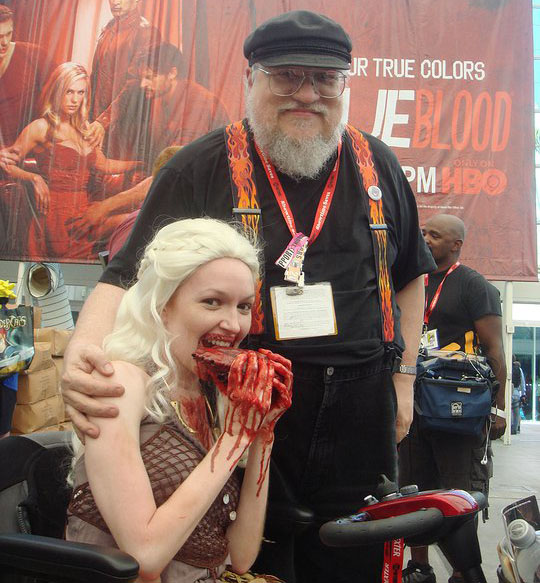 Why yes, I did meet A Song of Ice and Fire author George R.R. Martin at San Diego Comic-Con dressed as Daenerys. Why do you ask?

This may be good news to some, bad to others, but Martin has decided he won’t be attending SDCC 2015 so he can write more Game of Thrones books. On his Livejournal the author wrote:

Reluctantly, however, I’ve just had to scratch Saratoga off my list of 2015 appearances. For no reason having to do with the con itself. I am sure it will be terrific. It’s just a matter of time.

I have too much to do. Too many things on my plate. Son of Kong foremost amongst them.

My apologies to anyone who saw Saratoga on my Appearances page and planned to go in order to see me. I won’t be there. Go anyway. You’ll have a great time.

Also, I have decided against attending this year’s San Diego Comicon. Same reason. But since Comicon was never listed on my Appearances page, scratching it is not as big a deal.

(Should I complete and deliver WINDS OF WINTER before these cons roll round, I reserve the right to change my mind).

Previously, Martin’s published had stated there would be no new A Song of Ice and Fire novel in 2015, but it seems that might have just been an effort not to get hopes up. Fingers crossed it will be in our hands sooner than expected!