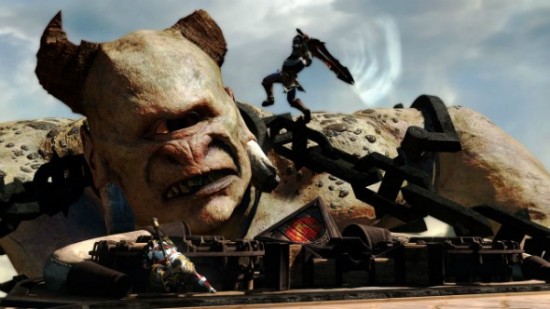 Not too long ago, Sony unveiled the next main (read: Not portable installment) God of War, God of War: Ascension. Each main God of War has had some incredible event happen in the game, be it technical, game play, or story related. God of War‘s feat was a PS2 game that looked as good as it did, but somehow featured virtually no load times. God of War II featured the surprising cliffhanger ending, and God of War III featured the Titan fights and the camera from the point of view of the victim you’re currently brutally murdering. Though we know God of War: Ascension will feature Kratos’ past, before the the series takes place, it seems the big feat of this game will be multiplayer. That’s right, God of War will have a fully fledged multiplayer component, and from what little we know, it doesn’t look too shabby.

The boys at GamesRadar were kind enough to capture some video, and provide a bit of narration:

The demo showed off a four-versus-four King of the Hill style mode, where players win the match not by hanging out in a captured territory for a set amount of time, but by ripping a huge eyeball out of a gigantic Titan cyclops. Sounds par for the God of War course. If you’re afraid that battling real live people would detract from God of War’s signature fatalities, think again, as you’ll be able to perform savage, demented finishing moves to other players, as shown in the above video.

This mode is actually a much better take on whatever multiplayer could be added to the series, as a simple deathmatch (which, for all we know, could make it into the final build as another mode option) would’ve seemed uninspired. Rest assured, we’ll be keeping our giant, vulnerable single eye peeled for any and all news regarding this blogger’s new most anticipated upcoming game.

God of WarGod of War: Ascensionmultiplayer