What was that about fake geek girl cosplayers again? 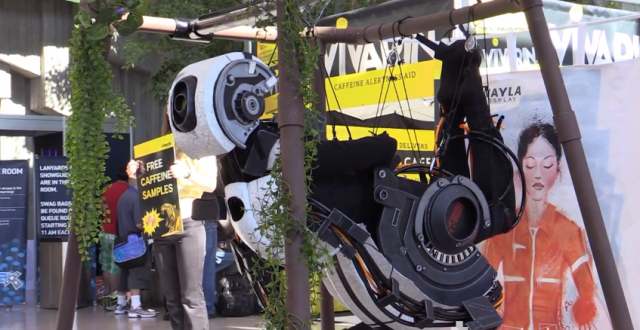 While a favorite among fans of the Portal video game series, GLaDOS is a tricky character to cosplay — since she’s, you know, a non-humanoid robot. While many cosplayers go for the “make her into a lady” route, Athena Cole of Enayla Cosplay decided to go with a different approach.

The structure she’s hanging from in the above picture was constructed out of PVC piping and a custom harness made from parachute cords. In order to get the angle right, Cole has to face down with her belly forward and hold her head upright from that position. However, the costume is also padded to hell and back on the inside.

“I’m attached at the shoulders, ribs, hips, and upperthighs, and have a knee and foot strap to hold up my legs.” Cole said. “With all of that, the only genuinely uncomfortable part was holding my head up at that angle.  Only slightly sore the next day!”

The rest of the costume is Worbla, which is apparently a special kind of molding thermoplastic favored by cosplayers. There are a lot of incredibly amazing in-progress shots on the Enayla Cosplay Facebook page and her Tumblr that show you the ridiculous level of detail that Cole used in creating the piece, right down to the crackle effect on the armor.

Cole unveiled the costume during PAX Prime 2013 this past weekend, and was interviewed by Invader Boom about her efforts. Warning — the below video is kind of creepy? But I mean that in the most complimentary way possible Seriously, that’s a person in there, guys.

(The Verge, image via Invader Boom)