My guess? He flies backwards around the world until his beard shrinks back into his face. 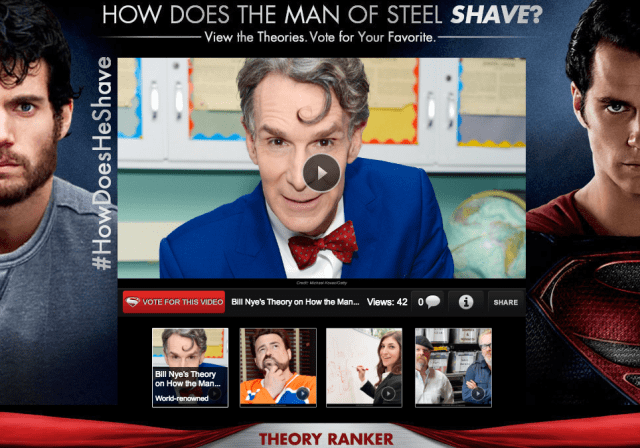 It might not have occurred to you while watching the Man of Steel trailer that since Clark Kent is depicted as having a beard in one shot, at some point he had to learn how to shave — which would probably be incredibly difficult considering the strength of his hair follicles. Razor company Gillette has definitely picked up on this, of course. They’ve launched a tie-in marketing campaign to postulate about how the Last Son of Krypton manages to look so clean-shaven all the time, and they’ve enlisted the help of Bill Nye, Mayim Bialik, Kevin Smith,and the Mythbusters to do it.

Called “How Does the Man of Steel Shave?”, the campaign is set up as a competition between four different theories. You’re supposed to vote for your favorite or come up with your own theory, and in doing so you make sure Gillette gets your undivided attention for at least three minutes, because that’s how marketing works.

First up are Jamie Hyneman and Adam Savage of Mythbusters fame, who bounce a number of quick ideas off of one another until they finally arrive at whisker-removing-wormholes generated by the Large Hadron Collider. Seems legit.

Then there’s filmmaker Kevin Smith, looking more animated than we’ve seen him in years — apparently all you have to do to get Kevin Smith really excited is ask him about Superman, which… well, yeah, I guess we knew that. In his video he meticulously debunks all of the already existing theories, including some that were actually used in the comics. Out of all the theorists, you can tell he’s thought about this the most.

Next is real live neuroscience PhD and occasional Jim Parsons-impersonator Mayim Bialik, who uses a lot of great real-world sounding science terms to explain how Clark might be able to denature his hair proteins with a special lotion. I think that she’s hoping we get so caught up in how intelligent she is and how good Superman could possibly smell that we vote for her by default.

Finally we’ve got the man who taught us all to care about science in the first place, Bill Nye. Like Mayim, he’s sticking to actual scientific principals, and out of all the candidates he’s the only one to color coordinate his outfit to the topic at hand, so we’re gonna give him points just on that. His theory is that Superman doesn’t cut his beard but instead grinds it down with a substance of similar strength.

If you care enough to vote, you can do so at the How Does He Shave? website. My money’s on Bill Nye, because come on. Look at how adorable and scientifically accurate he is. He’s even got his hair curled in the YouTube video preview. I would believe him about basically anything.

(via How Does He Shave?)