Bill Nye Is Not Dead, Did Not Challenge Todd Akin To Debate | The Mary Sue

Bill Nye Is Not Dead, Nor Did He Threaten Violence Against Anyone on Television 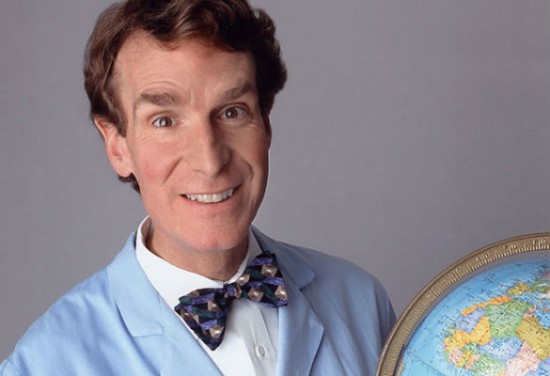 Okay, Internet. We need to have a talk about the way you have been treating Bill Nye, because it’s not cool.

To start the week off, Nye saw Twitter fake his death, resulting in a slew of tweets mourning the very-much-alive-and-well Nye. This was a particularly cruel trick to play on legions of  grieving nerds, coming as it did on the heels of the all-too-real passing of Neil Armstrong. But hey, it’s Twitter, and Twitter is good for nothing if not faking celebrity deaths. Yesterday, though, Nye got hit with another round of phony news about him when B-grade satire site — The Daily Currant —  posted a fake story about Nye calling Missouri Senate candidate Todd Akin “a fucking idiot” on television. It didn’t happen, of course, because come on you guys, this is Bill Nye, but it managed to get picked up and spread around as an actual thing, and this just needs to stop.

To its credit, Daily Currant has taken down the article, but not before it picked up more than 23,000 Likes on Facebook, many from people who thought it was for realsies.

Look, we get it. Bill’s a nice, well-mannered dude, and sometimes, there’s just nothing we’d love to see more than a really nice, smart guy go all Falling Down and just utterly lose his shit on the loudmouth idiots of the world. Because, man, who among us doesn’t feel the need to do that sometimes?

It’s not going to happen. The dude wears bowties and gets excited about space travel and asks people very politely to think about how they raise their children for the good of the whole world. He does not assail stupid politicians for saying stupid things, no mater how satisfying it would be to watch that. He does not use phrases like “rape stork.” Let us state that once more, because it is information you need: Given an infinite number of alternate universes, there are none in which the words “rape stork” have ever or will ever pass Bill Nye’s lips.

So here’s the deal: If you’re a Bill Nye fan — and if you’re a fan of this site, you probably are, being a person of clearly good taste with a finely honed curiosity about science, and yes, someone who is pretty attractive to boot — think before you pass on stuff like this. Check your sources. Confirm that things you are presenting to people are facts, rather than “fact-shaped objects” or “things that I would like to be facts.” That’s not responsible. It’s not a thinking, reasoned person’s action. The Science Guy taught us better than that.

As to the prospect of Bill Nye delivering vigilante justice, that’s more of an open book. For reference, there is one sure-fire way to tell when Bill Nye is about to get his crime-fight on. He will be wearing short shorts and a cape. If you see this, you will know that things have officially gotten real, and no evil will escape his sight.

We’ve reached out to Bill for his take on all this shazzbot, and will be sure to update you when he responds.