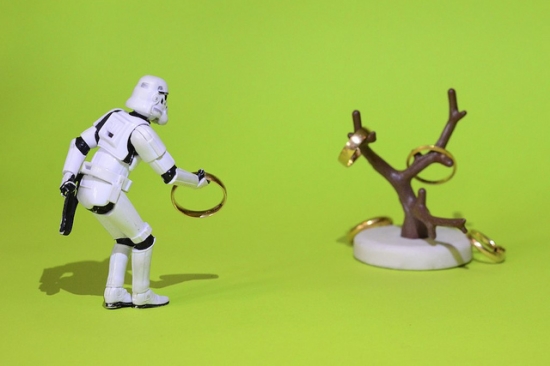 George Lucas has gotten engaged to longtime girlfriend Mellody Hobson. This answers the question of what Lucas plans to do now that he sold Lucasfilm to Disney. He donated all of that money to charity, which he seemed very happy to do at the time, but maybe now he wishes he only gave most of the money to charity. Weddings are expensive, especially when you have them on board a 1:1 scale replica of a Star Destroyer, which is where we assume the ceremony will be held.

This will be Lucas’s second marriage, and Hobson’s first. The two have been seen together at events ranging from film premieres to NAACP awards. Hobson is the president of Ariel Investments, LLC, a Chicago-based investment firm, which is worth an estimated $3 billion. That puts it at just $1 billion less than what Disney paid for Lucasfilm, so maybe Lucas won’t second guess his charity donation after all. They seem to be doing very well financially.

There’s no word of when the couple will get married, but May 4th is generally considered “Star Wars Day” because people like saying “May the fourth be with you,” so that’s our guess. We’ll keep the date open, Mr. Lucas. There are also no reports on where the couple is doing their gift registry, but considering she runs an investment firm and he just donated $4 billion, it’s probably not anywhere we can afford. Maybe we’ll just get them a gift voucher.

We don’t know how the two met, but because it is a great movie, we assume it happened exactly like in the short film George Lucas in Love, which is itself a parody of Shakespeare in Love, and similarly shows a young writer gaining the inspiration for his masterworks. It is absolutely worth nine minutes of your time.