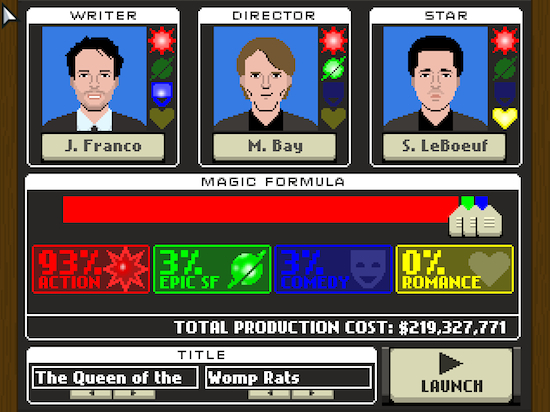 Star Wars fans really are an entertaining lot, what with their habit of proclaiming they can write something better when on the topic of the prequel trilogy and upcoming sequels. Now at last these delusional few can put their Republic credits where their mouth is, thanks to The Star Wars Sequel Debacle Simulatron: A game that accurately replicates every bad creative decision George Lucas has made since Episode I: The Phantom Menace. While we suppose you could stroke your ego and craft the greatest Star Wars film known to mankind, sometimes it’s better to see just how low one can go in mutilating our nostalgia beyond all recognition.

In spite of what the title says, you’re not making an actual movie, just choosing a writer, director, and star that ultimately influence how well your film will perform. That isn’t to say you can’t have some fun here. Why make logical and industry-savvy choices when its so much better to do what actual movie executives do: Make knee-jerk decisions predicated solely on what’s popular with the kids today — always accurate barometers of what’s hot and what’s not. Once you’ve selected your creative team that even Satan himself would approve of, it’s time to choose the sequel’s major focus and title. Here’s how critics reacted to our cinematic magnum opus, Star Wars: The Queen of the Womp Rats: 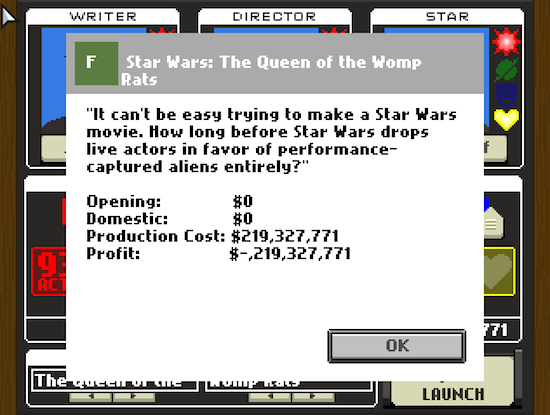 Now that we look at it, we’d be laughing right now if Star Wars: Queen of the Womp Rats wasn’t so alarmingly prophetic of what to expect from Disney’s proposed sequel trilogy.

(The Gameological Society via Topless Robot)