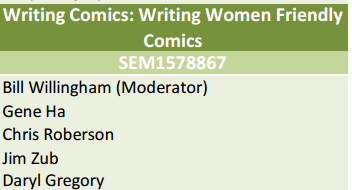 When Denver Comic-Con made the ill-conceived decision in May to hold an all-male “Women in Comics” panel, I hoped at the time that Cons everywhere would take note of the criticism DCC received and remember that representation is vital in planning events for, by, and about women in comics.

The panel’s description makes the distinction between a “Women in Comics” panel and a “Writing Women Friendly Comics” panel, noting that “dissenting opinions may occur.”

We reached out to the Writer’s Symposium for clarification and a statement, and received a thorough response from Gen Con’s Marc Tassin:

This year is the first year the Writer’s Symposium is hosting a comic writing track. As a fan of comics, it’s something I’ve long dreamed of doing. We knew that for this first we couldn’t bring a lot of people in to speak, but we thought we’d see what we could do to get this thing off the ground. Bill Willingham generously helped us to spearhead this effort.

One of the first people we invited was Gail Simone (who is awesome). Unfortunately, she wasn’t available. I do hope she can come next year! We’re certainly going to try.

I also tried to get Katie Cook to join us. She is local to my area, and another person I really respect. Unfortunately, she is “over-conned” at the moment and couldn’t fit more in.

Christina Blanch was scheduled to appear, but she and Mark Waid discovered that they were double booked and just a couple months ago had to cancel.

After reading an AMAZING article by G. Willow Wilson on her blog that talked about tropes, I started reading Ms. Marvel (which I also bought for my daughter – we both love her stuff). It captured the spirit of the old spider-man comics more than any comic I’ve seen lately. I sent her an invitation through a mutual friend and also through her site. Unfortunately, I never heard back.

This is the reason we don’t have any women speaking on the comic track this year (and thus no women on that panel). By the time we had to finalize the guests, the people we hoped to invite couldn’t come.

That said, I want to note none of these women were invited because they were women. We just reached out to awesome creators. My personal belief is that when you reach out to the best people you can, you’ll probably end up hitting about 50/50 men and women. The ones that were available this year just happened to be men. The simple, practical reality is that at some point you fill the seats with the people you’ve got (who are also awesome, btw) and try again next time. The show must go on!

As for the panel, this is an important topic, and as your emails show it is on a lot of people’s minds. Since the focus of our program (the Symposium) is helping writers of all types to become better writers and find success in their careers, this topic has been on the panel list since before we had any panelists.

I think you can see what we’re trying for with this. Is Ms. Marvel “for girls”? Or is it just an amazing comic who’s main character happens to be female?

So it’s true. We don’t have any women on the comics track this year purely due to how schedules worked out, but I didn’t think that should stop us from talking about an important subject. As the organizer of the Gen Con Writer’s Symposium, I have faith in the creators we do have to speak on this subject. Their work (Bill Willingham’s Fables, Jim Zub’s Wayward, etc) suggest that they’ll have a great deal of good advice to share with the audience. And since our panels allow for plenty of questions, hopefully the audience will help by sharing their thoughts as well.

Some of the panelists have done incredible feminist work, and it’s worth noting that female creators are included in other Writer’s Symposium events. But the description of the event, in addition to implying that a “Women in Comics” panel somehow wouldn’t allow for dissent (breaking: female comic fans not The Borg), also makes it seem as if organizers know this panel has the potential to play devil’s advocate at the expense of a group that, within the comics community, is still grievously underrepresented, misunderstood, and abused.

Regardless, it’s probably high time for another “Men in Comics” panel somewhere, huh?

UPDATE: Gen Con reached out to TMS via Twitter to let us know women will now be included on the panel!

Thank you @TheMarySue. With your reach, female speakers have reached out to the WS, and now are set to join the panel http://t.co/qxTdg9Pe9x